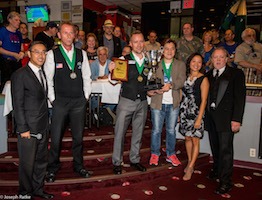 It seems only fitting that two adopted New Yorkers play for the World 14.1 Title on the 15th Anniversary of 9/11. Mika Immonen is from Finland, but he has resided in NYC for over 15 years. And Earl Strickland, who hails from North Carolina, has lived in New York for about five years now. 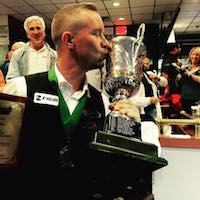 In the end, it was Immonen who was able to sigh a deep breath of relief.
“Between the nerves and 6 hours of play, I was shaking. I have to admit I was more of afraid of losing in the finals again then thinking of the joys of winning”, admitted Immonen. “But I now have this huge weight off my shoulders finally. I can’t believe it. I’m the World 14.1 Champion and it is just such a huge honor.” 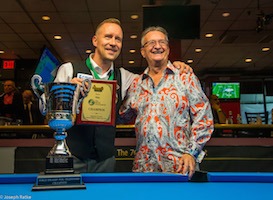 Straight Pool Hall of Fame inductee Pete Margo congratulates Mika after commentating on his match. They had developed a bond after meeting earlier in the week and Margo had been texting him well wishes in his matches.

Immonen, age 43, was inducted into the BCA HOF in 2014 while Strickland, age 55, gained entry in 2006. Both players have been at the top of the pool world for so long that they have become one name icons of the sport – if you say Mika or Earl, everyone knows who you are talking about.
Both players have excelled in 9-ball. Strickland has won a record five US Open 9-Ball titles and four World 9-Ball championships. Immonen has won back-to-back titles in the US Open 9-Ball and a world title in 9-Ball and 10-Ball.

In straight pool, Immonen won the 2007 Derby City Straight Pool title. He has finished third in this event in 2006, and was second in 2009 and 2010. Strickland had never cracked the top three in this tournament until this year, but he has run over 400 balls and he definitely plays world class straight pool. While both have secured their place among the game’s all-time greats, a World title in 14.1 would look great on their resume and it would boost their credentials as an all-around superstar. 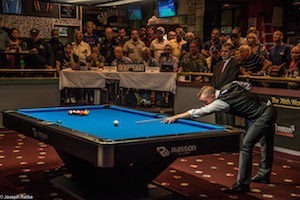 The Rasson TV table has super tight side pockets but the players have adjusted to it – Strickland ran a 135 and out on the table while Immonen had two runs in the fifties and a 69 and out in his semifinal match. Today’s final match is to 300 points, so they will likely be playing at least 35-40 racks. We should therefore be treated to every kind of layout imaginable, and we should see a mix of every kind of scenario, from long runs to defensive battles for the table.

Immonen and Strickland have been in the game for so long now that they each have developed huge and enthusiastic followings. The audience was very equal in terms of rooting for each player.

Immonen won the lag, Strickland broke, Immonen missed a long combo, and Strickland was off and running as he quickly cleared the first rack. But then he missed the break shot, setting in motion an uncharacteristic series of misses that would plague him throughout the first half of the match.

Immonen did run the second rack, but he missed the stack on his break shot and, after a safety battle, Strickland made a few balls, then ran 31 and now led, 53-13. But he missed another break shot and Immonen ran 48 to forge ahead, 61-53. Strickland managed to run 15, but missed again. Immonen ran 23 but got stuck on the stack, played an intentional foul, and now led, 83-65.

The resurgent Strickland was down by 100 balls but mounted a comeback to take back the lead. Strickland managed to make only three balls before missing for the fourth time. Immonen responded with a run of 52 before his key ball skidded. Strickland ran 12, but missed. Immonen managed to run four before getting stuck on the stack on a break shot. But after he played a poor safety, Strickland missed his first shot and Immonen ran 44 balls before committing a foul – so at the break he led by a score of 180-80.

The 30 minute intermission was just what the doctor ordered for Strickland as he came back with a vengeance, running 57 balls to narrow the gap – the score: 192-137. After his miss, Immonen ran 20, then made a huge error by failing to make contact with a ball near the jaws of the side pocket. So, with the score now 199-137, Strickland went back to work, running 61 balls before missing a ball on a skid and scratching in the side.
He caught the ball before it went it, so he lost 16 more points – 1 for the scratch, 15 for the penalty. The net result was that Immonen now led, 200-182 and was at the table with a break shot after making the final ball. Can you spell MOMENTUM CHANGE?

Immonen ran a rack, but jawed a close to the rail break shot and Strickland ran 32 before missing. The score was now tied at 214. But Immonen then ran 38 to take a 252-214 lead, but he failed to get shape on his break shot, so a safety battle ensued. The proceeding included several intentional fouls and three in a row by Immonen. At this point the score was 235-212.

Strickland put together a run of 48 then missed, but he was now leading, 260-236. Immonen came back with a run of 21 but got stuck on the rack and a safety battle took place. After several intentional fouls and short runs the score was 285 to 260 in Immonen’s favor. Strickland ran 10 balls, but missed a break shot and Immonen struggled through the last 15 balls to win the six hour marathon, 300-270.

It was the 11th year of Dragon Promotions producing the World 14.1, and the 10 year anniversary of the World 14.1 executive team of Charlie Williams, Cindy Lee, and John Leyman