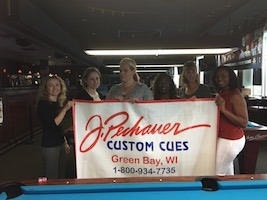 On the first day of October, fifteen stalwart players braved the rain and fog, to make it to First Break in Sterling, Virginia, for the 10th event of the J. Pechauer North East Woman’s Tour (JPNEWT) 2016 season. Coins of the Realm added $300 for first place, and $100 each for second and third, to bring the entire event to an added $1000. Just to make it more fun, the ladies voted to extend the race to nine on the A-side, maintaining a race to seven on the B-side.

The lights slicing through the dreary day came from newcomer Tina Malm, and familiar fan favorite Meredith Lynch, both winning through their opponents until coming face to face in the semi-finals. Meredith was on a straight win hot streak, and although no one pushed her to the hill, none of her opponents gave away their race. Meredith won over Nicole Fleming 9-7, Terri Stovall 9-5, Kathy Friend 9-7, and Tina Malm 9-6 and 9-7; leading Meredith to her first JPNEWT win.

Kathy Friend had some luck on her side when she took out tour director Linda Shea on the A-side 9-5, but couldn’t find a way to stop Meredith Lynch’s race to the top. Elaine Wilson fought through her first two opponents, only to be defeated by Tina Malm, on Tina’s way to the semi-finals. Kathy was back on fire when she beat Elaine Wilson 7-1, but was finally put out by Tina, as she was on her way back to Meredith.

Malm climbed through Judie Wilson 9-5, Heather Platter 9-1, and Elaine Wilson 9-7, to face Meredith in the semi-finals. After being sent to the B-side, Malm faced Kathy Friend, both ladies vying for the grudge match against Meredith. Kathy managed a respectable four games, but after placing third at the last event, Tina showed her drive to place higher this time.

In the finals, Tina took an early lead, but Meredith never let her get more than two games ahead. At game #8, with Tina leading 5-3, Meredith executed a safety, hiding the nine behind the three. Tina made a clean hit on the three ball, but the nine rolled into the jaws of the side pocket. Meredith shot the three in the corner, and then, taking her time on the next shot, stroked a great carom off the five ball into the nine, to make the score 5-4. The players took a break, but Tina only managed one more game, before Meredith’s momentum surged with a five game winning streak, to a 9-5 win over Malm.

Thanks go out to all of the tour sponsors, J.Pechuaer Custom Cues, Coins of the Realm, and Britanya Rapp, and we will be seeing many of the ladies back to pit their skills, in the next event on October 15-16, at Markley Billiards, in Norristown PA.