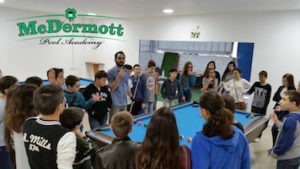 The McDermott Pool Academy is an exclusive billiard club located in Kiryat Bialik, Israel. It features five American pool tables and will be used as a practice facility for local players of all skill levels, as well as a hosting site for national pool tournaments and events.

McDermott Cue Mfg., LLC has provided the club with a variety of demo cues that can be tested on site. The McDermott Pool Academy will also serve as an authorized McDermott dealer in Israel.