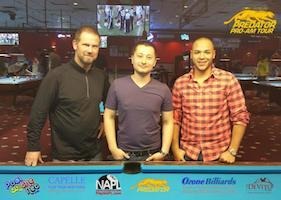 As he did last August on the Tri-State Tour, Max Watanabe came from the loss side to meet and defeat the hot seat occupant during the Predator Tour’s 2017 season opener, on the weekend of January 7-8. The $1,000-added event drew 74 entrants to Steinway Billiards in Astoria (Queens), NY.
Impacted by a powerful storm, it was the first time in Tour Director Tony Robles‘ memory that the Predator Tour’s season opener had drawn less than 100 entrants. Though impacting the quantity, the storm had no discernible effect on the quality.
With Watanabe already at work on a seven-match, loss-side winning streak, it was Abel Rosario who advanced to the hot seat. He’d defeated Troy Deocharran 7-4 in a winners’ side semifinal, as Brooke Meyer downed Rhys Chen 7-3 in the other one. Rosario claimed the hot seat 7-5 over Meyer and waited for Watanabe to complete his loss-side campaign.
Watanabe had been sent to the loss side by Rhio Anne (Annie) Flores. Four matches into his loss-side journey, right after defeating Dev Bhattacharya 8-5, they met a second time. Watanabe eliminated Flores 7-3 and drew Chen. Deocharran picked up George Poltorak, who’d gotten by Jose Kuilan 7-3 and Tommy Schreiber 7-2 to reach him.
It was Watanabe and Poltorak who advanced to the quarterfinals; Watanabe 7-2 over Chen, Poltorak 7-3 over Deocharran. Poltorak, due to a conflicting personal appointment, forfeited the quarterfinal match.
Watanabe then defeated Meyer 7-5 in the semifinals to earn a shot at Rosario in the hot seat. In the extended race to 9, Watanabe reached the ‘trigger’ number of racks (7), went on to complete his successful run 9-5 and claimed the event title.
Tour director Tony Robles thanked Manny Stamatakis and his staff at Steinway Billiards, as well as title sponsor Predator Cues, the NAPL, Ozone Billiards, PoolOnTheNet.Com, Cappelle Publishing,  and Delta-13 Racks. Robles also acknowledged the continuing support and assistance of Mandy Wu (ass’t TD), Irene Kim, and his “lovely wife,” Gail Robles. The Predator Tour will return to Steinway Billiards for a $1,000-added event, scheduled for the weekend of Jan. 28-29.
Max Watanabe Wins pool’s Predator Tour’s Season Opener
Tagged on: Predator Pro/Am Tour