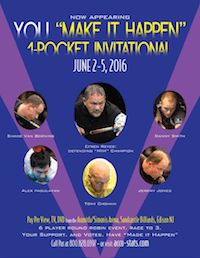 With less than a month to go, pool’s “Make-It-Happen” One-Pocket Invitational is one step closer to crowning a champion. On June 2-5, 2016, these one-pocket superstars will play in a round robin format. Everyone will play everyone else! The two players with the best won-lost record will play one more match for the title. Bill Incardona and Danny DiLiberto will provide the play by play.

The voting is done and the “Make-It-Happen” One-Pocket field is complete. Reyes, Chohan, Pagulayan, Van Boening, Smith, and Jones!

The six chosen one-pocket specialists are:

Alex Pagulayan: Voted in by Supporters

Danny Smith: Voted in by Supporters

This is Accu-Stats’ third one-pocket invitational in its “Make-It-Happen” series. This special event invites six players with an all expenses paid trip and no entry fee. Each player wins $1,000 for each match won. The only way that this is even possible is with the help of supporters who purchase the “Make-It-Happen” package. 100% of the support money goes into the four day event. Accu-Stats takes nothing.

The tournament will be staged in the Aramith/Simonis Arena at Sandcastle Billiards in Edison, New Jersey. All of the matches will be played on a Diamond Pro-Am pool table with Simonis Cloth and Aramith balls. We can’t do any better than that!

Of course, there’s still time to help support this event because we still have a ways to go to generate enough funds. Go to www.accu-stats.com and read about the goodies that you’ll receive or call me, Pat Fleming, at 800-828-0397 and I’ll tell you all about it!