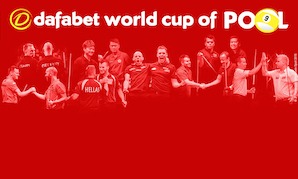 With the 2015 DAFABET WORLD CUP OF POOL set to kick off on Tuesday September 22 at the hallowed York Hall in London, promoters Matchroom Sport announced the global live TV coverage for the event. In total it will be carried live throughout in over 40 countries around the world.

The following providers are broadcasting all six days of the tournament:

For fans outside those territories, Perform Group will be streaming the event: CLICK HERE. In addition the Dafabet World Cup of Pool is syndicated around the world as 31 x 1 hour programs by Matchroom Television.

Featuring 32 two-man teams from around the world, the Dafabet World Cup of pool is celebrating its tenth year as defending champion England attempt to become the first team ever to successfully defend the title. The event runs from 22nd to 27th September.

Tickets are now on sale at www.SEETickets.com

The World Cup of Pool will carry a $250,000 prize fund including $60,000 for the champions. The event will be produced by Matchroom Sport Television and televised live on Sky Sports and then syndicated internationally as 31 x 1 hour programs.