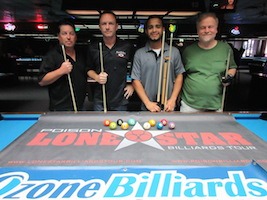 Steve Lenz of Orange, Texas, went undefeated to capture the 45-player, amateur 9-ball division, while Chase Rudder ran through an elite, 42-player field, securing the open 9-ball division, at the ninth stop on the 2017 Poison Lone Star Billiards Tour. Lenz conquered Austin’s Floyd Smith in the final, 5-1, and Rudder came from behind, winning nine matches, and defeating Yousef Jalal (VEN) in the finals, 7-2, 7-4.

In the open 9-ball division, Tommy Tokoph began his trek to the final four on the winners’ side with victories over Paul Alderete, 7-3, Bob Guzik, 7-3, and Cliff Joyner, 7-1. Yousef Jalal made his tour debut, ousting Will Felder, 7-5, Daniel Forster, 7-4, and Mark Smith, 7-5. Jason “Jaybird” Breland defeated J.C. Torres, 7-6, Nick Chavira, 7-5, and Kevin Frauenberger, 7-1, while Josh Roberts overwhelmed Brian Humphrey, 7-1, Karol Hughes, 7-2, Ernesto Bayaua, 7-0, and Steve Lenz, 7-5. The east-side, final four was set, and the one loss side was underway. Manny Chau was upset in the second round by Jeff Chauncey, 7-6, and came back to win 5 matches, eliminating tour newcomer Sam Abusalem, 7-2, Mark Smith, 7-1, and Lenz, 7-2. Joyner made his way, eliminating Chris Ramoz, 7-3, Floyd Smith, 7-2, and Frauenberger, 7-4. Following an early loss to Lenz, 7-3, Rudder ousted Adam Cooper, Bayaua, 7-4, and Chauncey, 7-5. Jeremy Byrd lost his first match to Rudder, 7-1, and plowed through the one loss side with wins over Chuck Adams, 7-4, Nick Chavira, 7-4, Bob Guzik, 7-0, and Danny Schauer, Jr., 7-1, before falling to Ricky Hughes, 7-3. The final eight players returned on Sunday, in the money. On the winners’ side, Tokoph fell to Jalal, 7-5, while Breland overcame Roberts, 7-3. On the west side, Chau dusted off Joyner, 7-2, and Tokoph, 7-3, while Rudder ended Hughes and Roberts by the same score, 7-3. Meanwhile, two, first-time tour players, teed off for the open division hot seat. Jalal pulled ahead of Breland, securing the set, 7-4. On the west side, Rudder eliminated Chau, then Breland, by the same score, 7-1. After 7 match wins, it was undeniable; Rudder was on fire. In the first set against Jalal, Rudder was down, 2-1, then broke and ran six racks, ending the set, 7-2. In overtime, Jalal made a valiant effort to salvage the title, but it was too little too late. Rudder took the second set, 7-4. Congratulations to Chase Rudder on a well-deserved victory.

Serving pool players, pool rooms, and sponsors since 2009, the Poison Lone Star Billiards Tour celebrates its 10th Anniversary in 2018 as the longest-running billiards tour in the south. A special 10th Anniversary Event will be held for players who compete in at least two events between now, and January 1st, 2018. There are only two events remaining this year, and players are strongly encouraged to meet the eligibility requirements, in order to gain entrance into this one-of-a-kind tournament. The next tour stop will be held on October 14th-15th, at Bogies West, 9638 Jones Road, Houston, Texas. This will be the last stop in Houston for the 2017 season. The final stop will be October 28th-29th, at CK Billiards in Dallas, Texas. For more information, please visit www.LoneStarBilliardsTour.com.