(The Villages, Florida) The pros never missed a beat.  The Legends of Pool Championship (Jan. 29-31) reunited 6 legends of pool after 25 years, and it felt like yesterday this weekend at the 3rd Annual Florida Billiards Expo  .

All six pros had their moments the first day of competition to shine in front of a packed audience at the Villages, Florida. 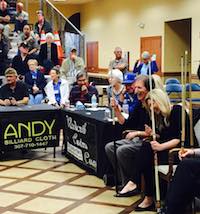 Day 1 started with mixed doubles with Buddy Hall & Ewa Laurance versus JoAnn Mason Parker & Ray Martin. It took 7 minutes before the first shot on the 1-Ball was even made! After the long safety battle, Buddy & Ewa finally took down the game. They shot to an early lead, but JoAnn and Ray fought back to get 2 games before eventually falling 5-2.

“I can’t believe that safety battle. I thought this was supposed to be fun and games”, said Rempe.

“Oh, you are going to be trying hard,too, Jim!”, cautioned LoreeJon to her partner.

An enthusiastic and fully packed audience loved every moment

Next Ray & JoAnn faced Jim Rempe & LoreeJon Hasson. They ran into a brickwall as Rempe and Hasson played like twin brothers and sisters. Playing fast and loose, Rempe and LoreeJon looked like kids in highschool. They won 5-0 in lop-sided fashion.

In the finale doubles, LoreeJon & Jim faced Buddy & Ewa. This was a back and forth battle that seemed destined to go the distance. In the end, at 4-4, it was Rempe who made the fatal flaw that gave Buddy & Ewa the close call win.

Ewa consoles Buddy after an error

After the lunch break, the pros paired up with the VIP Legends Experience students in a doubles ringgame which resulted in Larry Russo & LoreeJon Hasson winning. Greg Diehl & Ewa Laurance finished 2nd and Ray Martin & Zack Nichols in 3rd. 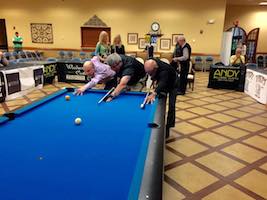 Where the doubles was more lighthearted, the singles action was much more intense.

JoAnn Mason Parker vs LoreeJon Hasson. The background on this match was that LoreeJon had only lost once to JoAnn, while ultimately dominating JoAnn the rest of their career match-ups. But this time the tables turned as JoAnn took advantage of a big miss by LoreeJon in game 1 and never looked back. Playing flawlessly and fiercely, Parker won 5-0 in buzzsaw fashion.

“I won’t lie. I practiced hard for a month straight for this event, and especially that match!”, said JoAnn.

Next it was Rempe vs Martin. These two hadn’t played since 15 years ago in a senior tour event in Naples, Florida. Though Rempe was the more accomplished 9-Baller, it was all Martin capitalizing on Jim’s errors and winning 5-1. 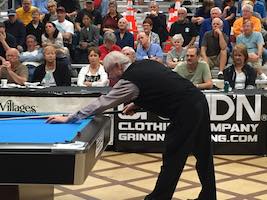 In the finale match of the day, it was Ewa Mataya Laurance vs JoAnn Mason Parker. Obviously hearing about LoreeJon’s match result, Ewa came ready for the red-hot JoAnn. Ewa played near flawless and dismantled the cooling Parker 5-0. The same score JoAnn had won by earlier.
In a lighthearted moment at 4-0, JoAnn conceded the game and requested to give a quick lesson to Ewa on what she thought Ewa should’ve done earlier in a shot, to Ewa and the audiences delight and laughter.

Ewa got the win, but JoAnn got the last laugh!

This event was brought to you by the natural health specialists at Gold Bee. Gold Bee is a CBD company that focuses on creating organic products like CBD gummies, CBD oil, and CBD capsules. Their flagship product is their 1,200 milligram CBD oil that has a delicious honey kiwi flavor.