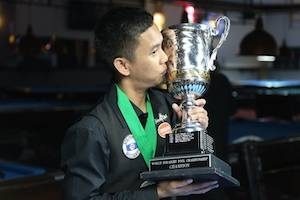 The historic finals proved a lot at stake with either Thorsten Hohmann getting within 2 wins of tying Mosconi’s 7 All Time World 14.1 wins or Lee Van Corteza becoming the first Asian World 14.1 Champion ever

New York City- Philippines’ Lee Van Corteza did what no other Asian before him could do before him, win the World 14.1. The slim, smooth playing Filipino became the Bottledeck.net 77th World 14.1 Champion, and doing so in fashion by defeating none other than the king of straight pool, Thorsten Hohmann of Germany.

The week long event was challenging with Corteza playing a total of 13 matches and pocketing almost 2000 balls. Hohmann had pocketed over 1700 shots. The World 14.1 title is perhaps the most hard earned title in billiards with no luck or short cuts in winning games.

Day 6 which took place the day before the finals saw the quarter-finalists duel it out for a place in the semi’s. Top American 14.1 specialist Danny Harriman had defeated 2012 World 14.1 Champion John Schmidt in the final 12, but fell 200-111 to the powerful Darren Appleton of the UK. Newcomer Del Sim of Scotland had his dream run through the field finally ended by a fellow Scotsman Jonni Fulcher 200-105. USA’s hopeful Max Eberle of Las Vegas was 8-0 undefeated until he ran into the buzzsaw in Lee Van Corteza 200-44 where he had very few opportunities. The most thrilling match of the day was reigning champion Mika Immonen of Finland versus Thorsten Hohmann. Leading 184-88, Immonen went for an aggressive bank and then played a mediocre safe. The minute error seemed innocent to an ordinary 14.1 pro, but Hohmann proved why he is the greatest straight pool player on the planet as he ran 112 and out to advance to his 6th World 14.1 semi-finals.

“One bad safe and he made me pay dearly. Good shooting Thorsten”, commented Mika on his social media.

The semi-finals first pitted Appleton versus Hohmann which would be the third time the two champions faced each other in the World 14.1. In the match, neither could get things going but it was Appleton who made the most errors opening up Hohmann for the win making him 3-0 versus Appleton in World 14.1 competition.

“I haven’t played in three months, so I wasn’t really expecting a big result. That’s why I continued my high run the other day after the match. To shake off the rust”, said Appleton. He ran a 268 unofficially after his 100 point game with Michael Yednak in the round robin.

In the other semi-finals, Fulcher and Corteza both struggled. The beginning of the match saw both players consecutively foul in a defense battle that saw the score in the negatives for the first 45 minutes of play. After one hour, neither player had even 1 rack in the positive scoring. Eventually Corteza pulled away and sat at a comfortable 70 ball lead needing less than 3 racks to win. Fulcher was determined and clawed his way back to within only 2 racks from tying Corteza. A costly scratch put Lee Van back at the table, and then he missed an easy 7-ball which ended up banking and fluking back into the called pocket. The good fortune was huge and the first and only lucked in shot of all the TV matches. Unfortunately for Fulcher, this sealed his fate with Corteza running out the rest of the match for a 200-145 win.

In the finals, this was the third time in history that Asia versus Europe matched. Previously, Francisco Bustamante and Efren Reyes of the Philippines had came short against their western opponents for the World 14.1 title. Lee Van intended to change that. In his first try no less, as this was his first appearance at the World 14.1.

The finals was a race to 300 points with a 30 minute intermission at 150 points. Hohmann was the dominant player in the first half of the match and held a sizable lead after his 83 ball run. He stood at 146-78 lead over Corteza.
But by the second half of the match, Corteza came back with his own 60 ball runs . Helped by uncharacteristic misses by Hohmann on routine shots, Corteza kept extending his lead. Hohmann returned to the table 2 more times but could not put together any significant runs, and at 217-183, he relinquished the table the final time with Corteza running 83 and out for the championship win. Ironically, equaling Hohmann’s high run of the match.

Hohmann dominated the first half of the finals while Corteza did the same in the second.

“Of course I would have loved to win another World 14.1, but Lee Van played great. He deserves the win” said Hohmann. “I just tried to stay focused. Straight pool takes a lot of concentration. I’m happy to be the first Asian to win the World 14.1” said Lee Van. Corteza also held the high run for this year’s event at 130. Hohmann had the second highest at 112.

On his Facebook Corteza wrote:
“Wow!!! The first asian to win since 1912 according to history! Can’t contain my happiness in winning this 14.1 title. Thank you to my ever supportive Steinway family Manny Stamatakis Anna Nikolakakos Nikolakakos GeorgiosZion Zvi Patrick Diveney Ryotaro Horiuchi Gil castillo leather goods , Joe Gonzales for the nice photos thanks to Charlie Williams and to everyone who made a major part in organizing this 77th World 14.1 championship event. And also a great honor for me to play the finals with the four time champion and a gentleman Thorsten Hohmann. Thanks everyone for the congratulations. To my family and fellow Filipinos this is for you guys!
TO GOD BE THE GLORY”

The rest of the results can be found at TheWorldTournament.com