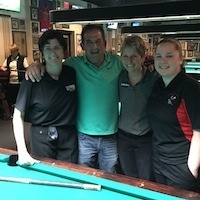 Corr defeats Miller in finals, after Miller’s eight win comeback on the one-loss side!

On the beautiful June weekend of the 25-26th, the back room of Champions in Frederick was full of 32 hopefuls for the 5th annual tour stop of pool’s J.Pechauer North East Women’s Tour. As always, the easiest way to the top is through the A side (as Karen Corr showed), with 6 straight wins: Nicole King 7-1, Sueyen Rhee 7-2, Christy Norris 7-4, Judie Wilson 7-1, Janet Atwell 7-3, and Briana Miller 7-4. But, perhaps more satisfying, is battling your way back from the one-loss side, as Briana Miller found out, with 10 total matches (4 more than anyone else).

Also on a winning streak was Janet Atwell, climbing with wins over Sandy Raber 7-4, Eugenia Gyftopoulos 7-1, Kia Sidbury 7-1, and Meredith Lynch 7-4. After Meredith had knocked back Briana Miller in the first round, she faced down Nicole Nester 7-5 and Dawn Fox 7-2. Then Janet Atwell sent Lynch to face the B-side, by winning 7-4; where Christy Norris gave Lynch a hill-hill battle, before Lynch’s grudge match against Briana Miller.

Judie Wilson struggled for her first win over Valerie Nolan 7-6, and continued through Nicole Fleming 7-3, and Kim Whitman 7-4, before she got CORRed, and then knocked out by Miller.  Christy Norris started well, beating Melissa Jenkins 7-4 and Denise Reeve 7-3, before her CORR experience.  Norris then barely managed to beat Kathy Friend on the hill, got Eugenia Gyftopoulos 7-2, and couldn’t make it up another hill against Meredith Lynch. 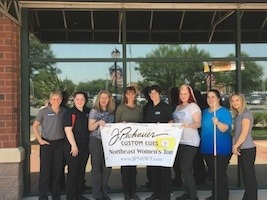 JPNEWT sends thanks to all the ladies who came out to pit their skills against each other, and to Gary Allen, Champion Billiards, for hosting this event!  And many more thanks to all of their tour sponsors: J.Pechauer Custom Cues, Coins of the Realm, Britanya Rapp, and Ozone Billiards, who allow them to continue to increase their skills and grow as players. And finally, thanks to Baltimore City Cues, for sponsoring the qualifier spot at this event.