18 year old Albanian rides a wave of confidence into the semi-finals of the RYO Rack Classic in New York. 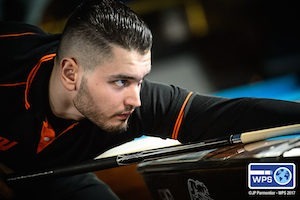 (New York City)–Generational battles will be on full display on Saturday in New York City as the RYO Rack Classic Championship, the third leg of the World Pool Series, comes down to its final day.

One semi-final, which has been slated for the Unilad TV table, will feature 18 year old Albania phenom Klenti Kaci squaring off against 24 year old American, Skyler Woodward. In the other semi-final, 37 year old veteran Polish campaigner Radislaw Babica will match wits against multi-world champion and soon to be Hall of Famer, 40 year old Darren Appleton.

Both semi-finals will be played concurrently at 1pm EST(GMT -4).

Nothing came easy for anyone on Friday at Steinway Billiards in Queens as the single elimination matches became pure tests of will and stamina.  Each match consisted of best of three sets, with each set being a race to six games. Combined with the brutally difficult 4 inch pockets, and the other rules designed to toughen up the game, this meant players had to perform at the highest levels of the sport to even have a chance to advance.

Amazingly the favorite among this supremely talented group of four falls to the kid barely out of high school, Klenti Kaci.  Kaci is, in essence, the defending champion here at the World Pool Series, having surprisingly won the last event in April, the Aramith Masters.  Since then, the tall, good looking youngster has stayed in the States honing his game in tournaments and money games, and spending countless hours a day practicing all facets of his game.

Kaci’s incredible skills and confidence have been on full display since the tournament began on Wednesday as he hasn’t even been touched or threatened. On Friday the Albanian first came up against England’s Chris Melling in the round of 16. Melling was still buzzing from the worldwide sensation he caused with his jaw dropping clearance against Mika Immonen the night before. But none of that phased Kaci. He took the first set, while Melling grabbed the second frame. It was then that the Albanian turned up the heat as he raced to a 6-2 win in the third to take the match.

Kaci then headed to the TV table for a much anticipated showdown with Austria’s Mario He. The confident He, who had recently captured the prestigious World Cup of Pool and is currently ranked number 2 in Europe,  had just eliminated New York’s Tony Robles in two sets to stay unbeaten in the event. The pair stayed close throughout a tense first set, but Kaci preserved to go up 1-0. Then, as he has done all week when it counts the most, the Albanian grabbed the iron while it was hot, and handily won the second set to advance to the semi-finals.

There he will face American Woodward in what looks to be a fine rivalry in the making. Like Kaci, the Peducah, Kentucky native has been riding a wave of confidence here in New York. In the final 16 match against fellow American Dennis Hatch, the pair of potential Mosconi Cup teammates engaged in an entertaining, back and forth affair that had plenty of twists and turns. Woodward won the first set 7-6, while Hatch barely squeaked over the line to take the second set by the same score. Woodward, though, was unfazed and handily grabbed the third set to move to the quarterfinals.

I always play with confidence. If you’re scared you can’t play your game. I’m a positive thinker. If you miss a shot there’s nothing you can do about it. All you can do is go to your next shot.

I lost to Klenti last time here at the Aramith Masters. I didn’t play good then, but I’m going to play a lot better this time. I’m going to make it hard for him.”

The other semi-final between Babica and Appleton will feature the other end of pool’s generational spectrum.  The veteran Pole grinded out two tough wins on Friday, first beating American Corey Duel, 2-1, then outlasting Israel’s Zion Zvi 2-1 in a slog of a match that lasted until 2am.

Babica will have surely have his hands full against a resurgent Appleton, who besides playing duties this week has also been deeply involved in all the aspects that come with being the promoter the event.  On top of that, Appleton hasn’t had much time on the table in the last few months as he has been tending to his mother in England who has been ill.

The Englishman, however, put in two of his best performances of the year on Friday. In the round of 16, he handily defeated compatriot Mark Gray, 2-0. Then against another Brit Imran Majid, Appleton did it again, winning handily, 2-0.

“I played a perfect match,” Appleton said after taking down Majid and moving to the semi-finals. “That was the best pool I’ve played in a long while. I can’t believe I’m in the semi-final as to be honest I  haven’t played much pool at all lately and also I’ve been organizing this event. It’s been tough for sure.”

Proof of just how good Appleton performed came from his vanquished opponent.

“Darren played the best 8-ball I have ever seen,” Majid said.

The semi-finals of the RYO Rack Classic Championship  begin at 1pm Eastern Time in the US(GMT-4).   The final will be played at 7pm EST.

The winner of the RYO Rack Classic Championship will take home $10,000.