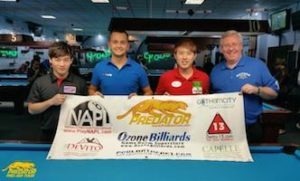 At about 1am this morning Konrad Juszczyszyn of Poland completed his undefeated run to the title in the Second Annual Gotham City Billiards 9-Ball Pro Classic, which is held in memory of Sharon Fagnoni, the late sister of Kevin Buckley, the tournaments host and leading sponsor.

I arrived at Gotham City Billiards a few minutes before noon, took my seat in a big comfortable stool, and settled in for a long day of watching eight of the best players in the world, who would be competing for the lion’s share of the $31,000 purse. The second photo shows the view from my chair, which include those incredible trophies for first through third place. Now, let’s go through the day’s eight matches, six of which were decided by three games or less.

Dennis Orcullo played super the first 13 games to take what appeared to be an unsurmountable 9-4 lead. Then the momentum shifted big time as Strickland won a game, then made a long distance combo on the 9-ball to close the gap to 9-6. He continued his superb play in winning the final four games to complete an amazing comeback against an opponent who was sitting on the hill. Orcullo finished 7-8.

Lee Vann Corteza and John Morra were tied at 7-7 when Corteza closed strongly in winning the last three games to advance to the next round. Morra finished 7-8.

Mike Dechaine’s formidable offense was in top gear as he stormed to an 8-3 lead. Then Corteza gave him a lift – one that put a grin on Dechaine’s face – when he called safety, then kicked the ball in! Dechaine completed an easy run to reach the hill. Corteza then scratched on a position play and Dechaine ran out from the 5-ball to advance to the final four. Corteza finished 5-6.

Hsu led 8-5 when Strickland won 2 of the next three games to trail, 9-7. In game 17 a loud talking fan disturbed Strickland, he missed, and conceded the final game to Hsu with 7 balls on the table. Strickland finished 5-6.

Juszczyszyn won 3 of the first 4 games. Cheng then captured the next 4. In one game he made a spectacular jump shot with a mechanical bridge while stretching to reach the shot! At this point Cheng led, 5-3. But Juszczyszyn came back strong, winning 6 of the next 7 games to reach the hill with a 9-6 lead. The key moment in this stretch came in game 14 when Cheng pocketed the 9-ball and followed the ball in, handing the game to Juszczyszyn. But Cheng did not quit, winning the next three, including a break and run, creating a race to one. The format is alternate break, and Juszczyszyn took full advantage as he broke and made a ball, made a table length shot on the 1-ball, followed that up with a super position play on the 5-ball, and ran out to win the match, and a berth in the finals.

Hsu blew his position on the 9-ball in game 3, missed on a bank, and lost. Dechaine won the next game as well to open up a 4-0 lead. Hsu won 3 of the next 4 games, then added another when Dechaine got distracted by someone in the crowd and missed shape on the 8-ball, then missed it on the next shot. Dechaine bounced back to win the next game and now led, 6-4. Hsu won the next 5 games to reach the hill with a 9-6 lead. Two of these were courtesy of mistakes by Dechaine – in game 13 he missed an easy shot on the 5-ball, and he scratched on the break in game 15. Hsu returned the favor by missing in the next game, and Dechaine ran out. He then broke and ran out to close the margin to 9-8. Hsu then broke and ran to close out the match. Dechaine made a spirited defense of the title he won last year, but it fell a little short and he settled for 4th place.

Two of the three players in the starting field from Taipei made it into the final three, making a case that this Asian nation is the world’s leading hot-bed of the sports superstars. Cheng won the first game, then Hsu won the next 4 to take a 4-1 lead. Cheng won game 6, then the players engaged in a mistake fest over the next 4 games. In game 7, Cheng jawed a super easy shot on the 8-ball and lost. Hsu then failed to finish off an easy 5 ball run. He missed an easy 8-ball in the next game, but still led, 5-4. In game 10 Hsu missed position, but jumped in the ball and won. In game 12 Cheng broke and ran out, tying the score at 6-6. They split the next 2 games, so it was 7-7 as the tension mounted. In game 15 Hsu scratched, leaving a combo on the 9-ball for Cheng. Hsu played a strong safe, got ball-in-hand, and ran out. 8-8. Hsu then broke and ran out to reach the hill with a one game lead. Cheng played a super safety of his own which earned him ball-in-hand, and he ran out. The score: 9-9! In the decider, the combatants engaged in a long safety battle which eventually led to a bank for Cheng on the 1-ball. He pocketed it and sent the cue ball the length of the table for perfect shape. He completed his high pressure run out to win the match, and to advance to the finals. Hsu took third.

It can be argued that the finals were played in the winner’s bracket match between these two, which Juszczyszyn won by a single game. Perhaps, as is often argued, the player in the hot seat has earned a well-deserved advantage of getting to rest while his opponent must fight to earn a spot in the finals. In any case, Cheng had just won a hard fought match to earn a rematch with Juszczyszyn, but then it was the young man from Poland’s chance to shine. And he did as he rocketed to a 10-5 lead in the race to 13. Cheng won game 16, but broke dry and Juszczyszyn ran out. Cheng scratched and left Juszczyszyn with an easy 5 ball runout. Then, in game 19, Cheng ran completely out of gas as he missed position, then missed the 8-ball. Juszczyszyn won the game, completing his 6 match streak of wins as he captured the Gotham City Pro 9-Ball Classis.

Many thanks go to Kevin and Isabel Buckley, who are the owners of Gotham City Billiards, and who are the hosts and sponsors of this event. Tony Robles of the Predator Pro/Am Tour and his team deserve many thanks as well for this well run event. Finally, thanks go to UpState Al for producing the stream, and to his team of commentators.