March 15, 2016 (Denver, CO): What a fantastic event today at the Billiards Cafe in Ayer, Massachusetts where we held the 2016 Massachusetts State Junior 9-Ball Championships. 23 junior players from Massachusetts, Connecticut and New Jersey competed for the coveted Official State Titles. Everyone played their hearts out, exhibited terrific sportsmanship, supported each other and, all in all, exemplified the best that this sport has to offer.

Michelle Jiang of Harvard Ma. won the State Junior Championship title, age 15-18 division, which she added to a string of State, National and International accomplishments. Sam Hoffman of New Jersey played some great matches to earn the runner-up honors in the 15-18 Division. In the 14 and Under Division it was Lukas Fracasso-Verner, of Connecticut, who went undefeated in the winners bracket for the State Championship title. Michelle’s younger sister, Tiana Jiang of Harvard Ma, played terrific for the runner up honors in the 14 and under division. The winners of this tournament earned paid entry into the Junior National 9-ball championships that will be held in Illinois in July. There they will compete for National titles, Scholarships, and a chance to be selected to represent the United States in the WPA World Junior Nationals in the Fall. 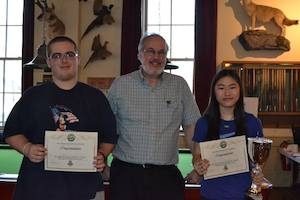 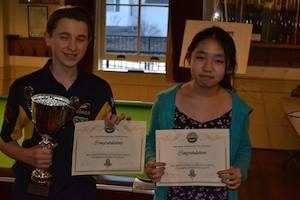 About the Billiard Education Foundation (BEF)

The BEF was formed in 1993 as a 501(c)(3) nonprofit charity committed to promoting a lifelong love of pool and building the next generation of players through youth programs and academic scholarships. Visit billiardeducation.org or call (303) 926-1039 to learn more about junior billiard programs in your area.