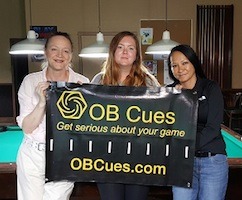 A stellar field of 48 women came to CK Billiards in Dallas on the weekend of June 25-26 for pool’s OB Cues Ladies Tour 4th stop. This is the first time that the OB Tour has stopped at CK Billiards and the event attracted several players from other regional tours, as well as other states, who came to experience the great fun of the OB Tour and the wonderful hospitality of CK Billiards.

Thank you to Jennifer Sherman, General Manager of CK Billiards, for her hospitality and service to all supporters, fan, players and general public. Also special thanks to event sponsors Starwoodmotors and Barisita Brothers. Starwoodmotors caters to an automobile style which is unique and luxurious for their custom/handcrafted vehicles.   Be sure to check them out at Starwoodmotors.com to see all about their specialized services and offerings. Barista Brothers strives to provide the utmost in coffee service like no other. They have a passion for absolute excellence with their coffee products and services. You can read all about their passion and products at baristabrothers.com. Enjoy!

As the tournament day progressed, Saturday was indeed a long day with so many ladies and many interesting upsets. The Freight Train that is Tara “Firecracker” Williams (Ft. Worth) was derailed by Nicole Keeney (Colorado), and former tour stop winners Orietta Strickland, Amanda Lampert (both of Dallas), Terry Petrosino (Houston), Jennifer Kraber and Michelle Cortez (both of Austin) all suffered at least one loss by the end of Saturday’s play.

Sunday brought back 12 ladies. On the winner’s side, Nicole emerged victorious over Ricki Casper (Houston), and Belinda Lee (Pearland) won a hill-hill battle against board member Shayla Neris (Austin). The four B-side matches saw up-and-coming player Yvonne Asher (Houston) defeat Amanda; two-time tour champion Tara beat Jennifer Pavlovick (Irving), new tour member Toby Stogner (Amarillo) won vs. Tera Saunders (Dallas), and Jennifer wound up on the winning side of a hill-hill battle against Terry. Shayla and Ricki both finished in 5/6thplace, which required a race-to-seven battle to determine who would win the qualifier for the next NAPT Tour stop, as they were the last remaining candidates out of 11 qualifier contenders and both finished in the same position. The two NAPT Qualifier winners were Ricki and Belinda. Unfortunately for Belinda, she will not be able to make the Grayslake NAPT Division 1 Pro event, so Shayla will be taking the invite. We wish all OBCLT representatives best of luck at the Shooter’s Sports Bar and Billiards, Grayslake, IL – $21,000 total purse event August 18-21, 2016.

The final four players were Nicole vs. Belinda for the hotseat match, and Tara vs. Jennifer K. on the other side. Nicole, who in recent years has won the OB Tour stops she has attended, won the hotseat, sending Belinda to the B-side. Jennifer managed to capture a hill-hill win against Tara while she then continued to defeat Belinda and meet up with Nicole in the finals.

Right before the finals match was about to commence, the raffle drawing for the two beautiful OB cues donated to support the tour followed an unbelievable trend, sending both cues home to Terry Petrosino and Richard Holstein, who now own an arsenal of OB cues!

As in a true double elimination format, Jennifer would have to beat Nicole two sets to win the tournament and that is exactly what she did. In the first set, Nicole made a couple uncharacteristic errors which Jennifer was able to finish each game all the while giving her confidence and strong momentum with full steam ahead. Jennifer was truly on a roll and playing in near flawless fashion, caught a gear and finished the first set 7-3. They began the second set almost immediately, and while Jennifer still couldn’t miss a ball, Nicole played strong herself, fighting back with absolutely beautiful shotmaking and finesse of her own, with several break and runs during the final set. Jennifer reached the hill first and had a chance at 6-5 to finish out the tournament win with a break and run, but made the nine-ball and then scratched, thus making it a nail-biter and tense game, set and match for the eventual winner. In the final game, Nicole had the same opportunity and shot as Jennifer did in the previous game, but just barely missed pocketing the nine giving Jennifer the win. It was Jennifer’s birthday, so it was probably meant to be. There were a few June birthdays that weekend, including the Tour angel Carter’s birthday, so there was much celebrating all weekend. The ladies presented Carter with an Edible Arrangement, cupcakes and his own personal figurine with our undying love and honor to have Carter as part of this tour family always and forever. We love you Carter!

Thank you to the OB board members, who go out of their way to make the events fantastic even when tournament play lasts past midnight and then they have to be back early the next day. Thank you again to Carter for all the support, chocolate, energy goodies and love of the game and the ladies. Special thank you to all the players who traveled from near and far to participate and make the tour the fun experience that it is! And last of all thanks to OB Cues, our title sponsor since 2008. They have the best products and are the best sponsors ever—bar none. Check them out at obcues.com and be sure to get the Digicue…..one of their newest product offerings……you can’t go wrong with this one.

Our next stop is September 17-18 at Slick Willie’s in Austin, TX.

Check us out at www.obcuestour.com or stay up to date with instant news by adding us on