“With a convincing 7-3 victory over Katarzyna Wesolowska (Poland), Jasmin Ouschan (Austria) has secured another title for her collection, the victory at the Dynamic Billiard German Women’s Open in the Stadthalle in Baunatal, Germany.” 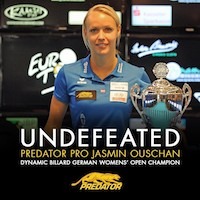 (Ouschan, a Predator Cue representative, went undefeated in her matches at the German Open)

“Most matches, she was dominant from start to the end. Whenever she had to struggle, it seemed that this was only in the first few racks of the respective match. Then, there appeared to be a point in time when Ouschan kind of ‘switched into overdrive mode’ and simply ran away from her opponents.

” ‘It is true, this happened quite some times during this tournament’, stated Ouschan, who went undefeated in the event, ‘I have been practicing my mental side and I think it is an advantage I have over my opponents’. When asked about her future focus, she replied: ‘My next goal is the China Open which will be played in about a month… This tournament was a prefect preparation for me. Things really worked out my way and I am confident to get a good result in China.’ ”

For the full report from the European Pocket Billiard Federation, CLICK HERE