(CueSports International, Henderson, NV – Aug. 26, 2016)  — With cool determination, Justin Bergman iced his opponents to win the 9-Ball Division of the US Bar Table Championship (USBTC) Friday at the Westgate Hotel & Casino in Las Vegas, beating Shane McMinn in the finals by a score of 9-7. 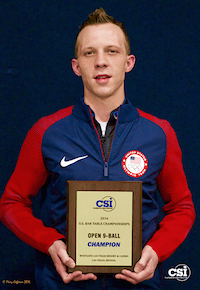 The finals of the 9-Ball Division, which had an alternating break format, started with each of the players breaking and running a rack. In the third rack, McMinn, who had won the lag, jawed the seven ball, giving Bergman the rack and an advantage that McMinn was unable to overcome.

Bergman is also still undefeated in the 8-Ball Division, which began Friday, so he has the opportunity to win the USBTC’s Triple Crown, a feat that has never been accomplished by any player.

In addition, he’ll receive Mosconi Cup points for his wins — a fact that is very important to him. Before the start of the USBTC, Bergman was 14th on the Mosconi Cup rankings. 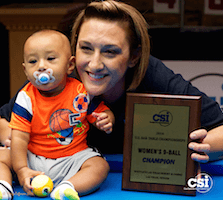 Rebecca Wagner of Las Vegas, who placed second in the Women’s 10-Ball Division, found her way to another finals and was able to capture the 2016 USBTC Women’s 9-Ball Champion title early Friday, beating Susan Williams of Chandler, Ariz. in the finals posted wins against Mary Coffman, 7-4; Debra Aarens, 7-1; and Tina Larsen, 7-1. She beat Williams in the hot seat match, 7-4 on Thursday and repeated that feat in the finals.

Williams tournament included wins over Sierra Reams, 7-5; Grace Nakamura, 7-6; Anne Carmona, 7-5; and 10-Ball Champion Jessica Frideres, 7-5, before being sent to the B side of the bracket by Wagner. Then Williams beat Frideres again, 7-3, to secure her spot in the finals.

The US Bar Table Championships continues through Sunday with the 8-Ball divisions in full swing. The Open 8-Ball Division has 101 players and there are 26 players in the Women’s Division.

Players who place in the top 32 of each open division receive Mosconi Cup USA Team points on a sliding scale. The top three American players with the most points at the end of the year will be selected for the USA Mosconi Cup Team.

The 2016 US Bar Table Championships are produced by CueSports International, the parent company of the BCAPL and USAPL. CSI also produces independent events, such as the US Open 10-Ball Championship, the US Open 8-Ball Championship and much more. For more information, visit www.playcsipool.com or call 702-719-POOL.