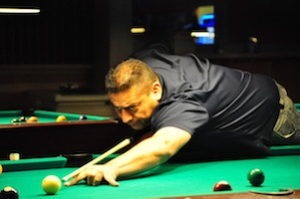 Seventeen years ago, David Gutierrez chalked up a win at the 27th Annual Texas Open. It was his first appearance in the payout lists of the AZBilliards database, which, with two exceptions, has included cash winnings for him every year since then. The exceptions were 2006 and last year. He won the Texas Open a second time in 2005, and cashed in that event on a number of other occasions. A regular and regular winner on the Fast Eddie’s Tour in Texas, and the Lone Star Billiards Tour, he’s appeared and cashed in major events like the Derby City Classic, The US Open 9-Ball Championships and The US Bar Table Championships. His best year, according to our records was 2004, in which he won a stop on the Fast Eddie’s and Top Dawg Billiards Tour’s One Pocket division, along with cash appearances in (among others) two Carolina Opens, a stop on the Southeast Open 9-Ball Tour, and the Music City Classic. 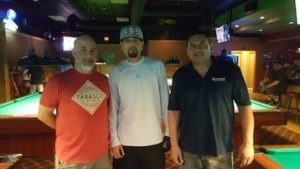 On the weekend of June 24-25, after a year of absence from any of our payout lists (which means, basically, that if he won any tournaments, we didn’t hear about them), he returned to the Texas stage and chalked up a win on the sixth stop of the Omega Billiards Tour. Gutierrez went undefeated through a field of 85 in the $1,700-added event, that was hosted by Click’s Billiards in Arlington, TX.

Five matches that included two shutouts brought Gutierrez to a winners’ side semifinal against Amos Bush, the first opponent he faced who was, at the time of the match, ranked among the Omega Tour’s top 20 players (#17). Mike Voelkering (#9), in the meantime, met up with Ray Amarro. Gutierrez downed Bush 9-5, and was met in the hot seat match by Voelkering, who’d defeated Amarro 7-4. Gutierrez claimed his first (known) hot seat since 2015 with a 9-1 victory, and waited on Voelkering’s return from the semifinals.

On the loss side, Bush picked up Jay Murillo, who, after being defeated by Aram Hasan in the third round, was on an eight-match, loss-side winning streak, that included a victory over the tour’s #1-ranked player, Rick Stanley, and would take him as far as the semifinals. He’d recently defeated TJ Davis 6-4 and George Merchan 6-2 to reach Bush. Amarro drew Robbie Cleland, who’d been one of Gutierrez’ shutout victims in one of the winners’ side quarterfinals and on the loss side, defeated Doug Winnett 7-3 and Greg Sandifer 7-6 (Sandifer racing to 8).

Murillo downed Bush 6-4, and in the quarterfinals, ran into Cleland, who’d eliminated Amarro 7-2. With Cleland racing to 7, Murillo chalked up his last win 6-6 over Cleland, before running into Voelkering, who ended Murillo’s loss-side streak 7-1. Voelkering put up a bit more of a fight in the finals than he had in the hot seat match, but Gutierrez prevailed 9-4 to claim the event title.

Tour director Melinda Bailey thanked the ownership at staff at Click’s for their hospitality, as well as sponsors Michael Hoang of OMEGA Billiards Supply, FargoRate.com, and OB Cues. The next stop on the Omega Billiards Tour, scheduled for July 15-16, will be a $1,700-added event, hosted by Open Table in Azle, TX.By AZB Staff Skip Maloney