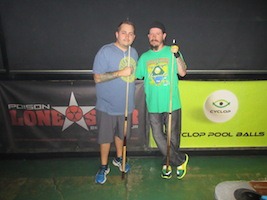 It was nearly an all-Austin shoot-out in both divisions, as local talent, Kevin Guimond, took charge of the 45-player, open 9-ball division, going undefeated to win his first title on the Poison Lone Star Billiards Tour. Guimond slid by Austin’s Jimmy Krone, 7-6, in the first set of the true, double elimination final, claiming his first tour victory. In the 52-player, amateur 9-ball division, hometown favorite, Justin Espinosa, faced off with newcomer, Sam Devita, claiming the first set, 7-0, and his second amateur division title.

The open and amateur 9-ball division action kicked-off Saturday afternoon, and brought back the final   16 from each division, with modified races, on Sunday. In the open 9-ball division, Kevin Guimond was on his way, with wins over David Henson, 7-4, Matt Wong, 7-2, and John Eagle, 7-4, while Houston’s Masahiro Nakahara ousted John Hedgepath, 7-3, Paul Jobe, 7-3, Brian Rosenbaum, 7-6, and Josh Dordek, 7-2. Jimmy Krone took down Pat Castro, 7-3, John Wright, 7-3, Ray Navarro, 7-3, and Jason Harkrider, while Phil Sidari bested Ed Ambros, 7-5, Rex Cour, 7-2, and Dennis Carlson, 7-6. As the final four took shape, on the west side, Wright was on fire, eliminating Hughes, 7-0, Jim Miller, 7-6, Wong, 7-6, Casey Crews, 5-2, and Jason Harkrider, 5-0, reaching the final four on the one-loss side. Rosenbaum ended Escobedo, 7-6, followed by Dennis Carlson, 5-0, while Justin Espinosa took out Pat Castro, 7-1, Sam Lockley, 5-0, and Josh Dordek, 5-2. Sam Devita eliminated Kim Pierce, Daniel Perez, 5-4, and John Eagle, 5-3. It was down to the final eight. On the winners’ side, Guimond made quick work of Nakahara, 7-1, and Krone overwhelmed Sidari, 7-3. West side action witnessed Wright defeat Rosenbaum, 5-1, and Nakahara, 5-3, earning his seventh straight match win, while Devita took down Espinosa, 5-4, Sidari, 5-0. As the one-loss side was winding down, the hot seat match was underway, with Kevin Guidmond taking a tremendous lead over Krone, and closing the set out, 7-1. Wright headed into his eighth match on the one-loss, and was struck down by Devita, 5-2, who in turn, was eliminated by Krone, 5-3. Krone earned himself an opportunity to avenge his hot seat defeat, and Guimond was ready. Guimond came out swinging, and Krone answered back, game for game. In the end, Guimond pulled ahead, ending the first set, 7-6, to win his first Poison Lone Star Tour title! 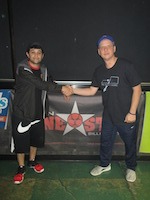 In the amateur division, Justin Espinosa logged wins over Ray Navarro, Monk Jiminez, 5-0, Daniel Perez, 5-1, and Mark Wilson, 5-2, while Jim Miller ousted Cliff Johnson, Sam Lockley, 5-0, Paul Jobe, 5-4, and John Wright, 5-4. Sam Devita made his way with wins over Elijah Hughes, Gerald Holland, 5-4, Pat Castro, 5-4, and Brian Rosenbaum, 5-0, while Josh Dordek took down John Eagle, Chad Morace, 5-0, Tom Rehm, 5-2, and Robert Smith, 5-3. Rounding out the final four on the one-loss side, Nakahara was on a role, eliminating Johnny Cope, 5-3, Jobe, 5-1, and Smith, 5-0. Rosenbaum eliminated Perez, 5-4, and Pat Castro ended Wilson, 5-2. Sage Serda made a stand, eliminating Santiago Garza, 5-3, Rehm, 5-4, and Wright, 5-4. On the winners’ side, it was Dordek over Devita, 5-2, and Espinosa over Miller, 5-3. On the west side, Nakahara secured his fifth, consecutive match, besting Miller, 5-1, as Devita overtook Serta, by the same score. In hot seat match, Dordek took a back seat to Espinosa, 5-2, while Devita ended Nakahara’s run, also by the same score. Devita went on to eliminate Dordek, to meet Espinosa in the finals. The Austin favorite wasted little time, overcoming Devita in the first set, 7-0, acquiring his second, Poison Lone Star Tour title!

The Poison Lone Star Billiards Tour will celebrate its 10th Anniversary in 2018. There will be a very special event planned for tour members only, to say “thank you” for your patronage. In order to be a member, the only requirement is that you participate in at least one (1) tournament per year. Tour membership has always been free, however, for this very special 10th Anniversary Event, players who have participated in at least two (2) events, beginning June 10th, 2017, leading up to the 10th Anniversary Event, will be eligible. This event will be unlike any other tournament the tour has ever produced, and players are strongly encouraged to meet the qualification, so they do not miss out on this opportunity.