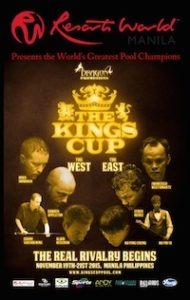 (Manila, Philippines, Dragon Promotions)  Never before have two teams been so stacked with skill and talent. The inaugural Resorts World Kings Cup will mark the first time Europe and USA join forces to face again the greatest players of the Asia with Philippines and Taiwan also joining forces for the very first time in history!

European and American champions will go against Asia’s champions on November 19th at Resorts World Manila  in the inaugural Kings Cup! In what surely will become the most epic rivalry in cue sports, the pool world is about to get rocked in a war that fans have been dreaming about for years.

Dragon Promotions is pleased to produce the Kings Cup, a three day contest to declare which side of the world boasts the strongest players, the East or the West. On November 19th-21st  2015, the world, as well as the players themselves, will find out!  Four players on each side have been selected to represent their continent.

Aired on ABS-CBN Sports Channels for 12 hours of coverage and replays.

Pay Per View earlybird discounted special is now available on www.KingsCupPool.com for $24.95 for all 3 days, or $10 per day. Fans can watch live or the delayed telecast up to 24 hours after the event at their convenience.

“This is the most concentrated group of great players I have ever seen. For sure there is going to be some amazing pool during those three days”, said Finland’s Mika Immonen , Captain of Team West.

“The competition is much bigger over there against the Asians…There’s going to be a lot of fans watching and big TV coverage. That’s why I really enjoy playing in the Philippines the past 10 years”, said America’s Van Boening.

“If you don’t like playing under big pressure in a big time atmosphere, you are in the wrong job, pal”, said UK’s Darren Appleton.

“Usually there’s a lot of work for me to take care of the USA team and then I have to play as well. In Kings Cup there are multiple world champions on the team. Mika, Darren, and Albin who was World #1. All three are great players. They know how to prepare themselves to be in a world championship finals. They always stay hungry and I don’t have to worry about any of them”, explained Van Boening.
“It means less work for me, and I can focus more on playing. That makes me excited.”

Follow the Kings Cup at www.facebook.com/kingscuppool and visit www.KingsCupPool.com for updates. Fans and sponsors can e-mail dragonpromotionsnews1@gmail.com 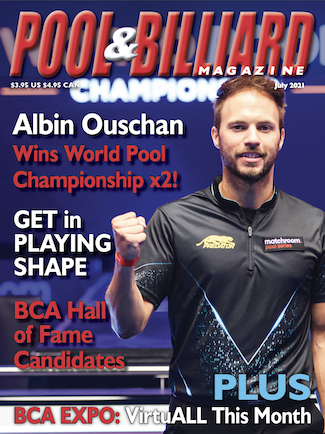