“Newspapers wrote about Gleason, his TV and movie career, the major golf tournament that bore his name. And we loved to describe his fancy new split-level house in the Hills of Inverrary subdivision (not a hill in sight) with the billiard room designed by famed pool (Hall of Famer) shark Willie Mosconi — inspired by Gleason’s portray of Minnesota Fats in the 1961 classic The Hustler. And the saloon with the circular bar, supposedly a replica of Toots Shor’s joint in New York, Gleason’s favorite haunt back in his hell-raising days.”

Jackie Gleason’s once-famous house is now up for auction – By Fred Grimm, October 26, 2015

“Oh, how sweet it was. In the 1970s, Glea Manor was among the most renown residences in South Florida, the house built to accommodate the Great One himself. When Jackie Gleason (aka Ralph Kramden of The Honeymooners) moved from Miami-Dade to his 6,085-square-foot golf course home in Lauderhill in 1972, he instantly became Broward County’s leading celebrity.

“The house came to have a kind of celebrity of its own. Which made the ad in the real estate section of Sunday’s Miami Herald so startling to old eyes. “Real estate auction. Sunday, Nov. 18, at noon. Former Jackie Gleason estate. Listed at $388,800. Bring all offers.” 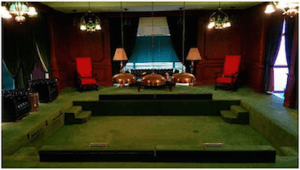 “The wood-paneled billiard room with its overhead brass light fixtures is still there.

“The circular bar. Glea Manor, judging by the Zillow photo spread, looks to be in great shape, with six bedrooms and marble baths, roman tubs, bidets and a big kitchen. (The1970s interior does seem a bit overcooked by modern standards.) The house, in a guardhouse community, is situated on a lake, at the end of a quiet street, just a block from the once-legendary Inverrary golf course where the likes of Jack Nicholas and Lee Trevino played for big money, where Richard Nixon and Bob Hope teed-off with Gleason.

“All that grandeur. And now it’s ‘bring all offers.’

“Of course, what passed for a celebrity mansion in the 1970s is hardly more than a suburban tract house compared to the extravagant homes the rich build themselves in this new gilded age. Gleason’s white-brick home with a carport and two-car garage was not some imposing ego-palace designed to loom over the neighborhood. It didn’t scream money — a necessary amenity in 2015.

“But the coming auction also says something about the changing demographics of Lauderhill. The 1970 census listed only a single black resident in the city. Most of the residents were New Yorkers come south. By 2010, about 76 percent of the city was black, about half of those residents from the Caribbean.Lauderhill, once a haunt of snowbirds, has evolved into a working-class town. Real estate analysts say that Lauderhill, still dogged by unsold foreclosures, has taken longer than other South Florida cities to recover from the recession.

“But still, this was Ralph Kramden’s place. Minnesota Fats and Sheriff Buford T. Justice lived here. The Great One died here in 1987. Surely, it ought to be worth something more than $388,800 just to stand in the doorway and shout, “And away we go!” ”