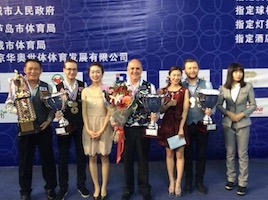 Luke Szywala from Krakow, Poland played Florian Kohler from France, in the semifinals winning 90-88. Sebastian Giumelli from Argentina came thru the preliminary rounds with the highest score at 270 points and moved into the playoff rounds, defeating Charlie Darling 45-29 with both players getting off to a slow start. 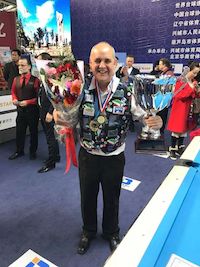 Sebastian (pictured on the ledt) continued his winning way defeating Wang Mengan 82-72 and Chi-Ming Lin 103-79, until finally claiming the overall “championship victory” in a close match in the finals with Luke Szywala 72-65.

A “big” congratulations to Sebastian Giumelli for his outstanding performance and earning the prestigious 2017 WPA World Artistic Pool Championship Title!