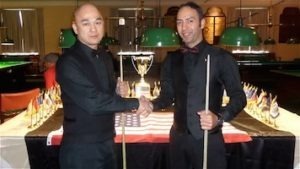 In what was the greatest snooker Championship ever played with the best overall standard throughout, the player from Brooklyn, who lost the first frame of his first group match against Saif Ibrahim though went onto win 2-1, grew into the event and became by far the most consistent performer.

The disappointment of two Championship runner-up positions in 2004 and 2014 have been so evident in Fung, as he frequently talked so much about that his main goal in snooker was to win this prestigious title especially after losing in the semifinals of both the 2015 and 2016 Championships.

When Fung, who entered this Championship as the number four seeded player, went 3-1 behind to Ajeya Prabhakar in the semifinals with the two-times champion from California just seeking one frame for victory, it seemed his dream of a first national title was so far away.

However you can see on Fung’s face when he competes at snooker, just how much focus and intensity he puts into each shot as he lives and breathes the frame.

It was with this mindset in the final against Aly, that he raced into a rapid and decisive 3-0 advantage, which included a run of 48 in frame two.

Playing in his home club and in front of a NYAC audience, Aly, who came into this Championship as the number two seeded player, had to step up to the plate and try to make an impact on the final as it was slipping away from him. He duly picked up his game to win the fourth frame on the final colored balls, and he came back after the mid-session interval to win an excellent frame five to reduce his deficit to 3-2.

The pressure had now swung back to Fung to maintain his lead in the final, and in the sixth frame he crucially endeavored to pinch it on the final black by one point to go 4-2 ahead and requiring just one more for victory.

On the brink of his greatest ever snooker achievement, the tension on Fung was evident as Aly forged through the next two frames with ease, constructing a fine break of 69 to clear the table to win frame seven and comfortably securing the eight frame.

As the players shook hands for a final frame shootout, the audience settled down in complete silence feeling as nervous and tense as the competitors on the table.

It was Fung who pocketed the first red but missed the subsequent blue ball attempt, and from then Aly took initial control of the frame. However, while on a run of 21 and 36-12 ahead in points, with the frame and Championship seemingly slipping away from Fung, Aly missed a routine black off its spot and that proved pivotal in the changes of fortune.
Aly never seemed to recover from that missed black, as Fung was then presented with a golden opportunity to get right back into the frame of which he took to go 40-36 points in the lead and take control of the frame. He laid a terrific snooker and assisted with some favorable rolls of the balls and a loose safety shot from Aly, Fung got over the winning line by pocketing the final blue and eventually making the final pink much to his huge relief.

Defeat will come as a huge disappointment for Aly, not just because he narrowly missed out in taking a fourth title at his home club where there was much expectation of him, but he has now lost three finals in succession — not having won this Championship since 2011.

The record title winning five-times champion and Vice-President of the United States Snooker Association (USSA), 81-year-old Tom Kollins, who during the NYAC cocktail party the evening before the commencement of the Championship received a USSA Lifetime Achievement Award, was given the honor of making the trophy presentation to Fung, who had earlier been fighting away the tears such was the emotion of his victory.

Alan Morris, the Executive Director of the USSA who was also the Tournament Director, was full of praise for the NYAC as the host for the Championship.
“The NYAC has really set the bar incredibly high as a Championship host,” he said. “This has to be the most beautiful billiard room in the whole of the United States, with the most amazing views looking over Central Park.

“The hospitality shown toward the players during the Championship was fantastic, and I would personally like to offer my gratitude to the NYAC billiard room committee members Kristin Barbato and Vincent Ji for everything they did to make this such a special Championship.
“My gratefulness also goes out to the players of whom none of this would be possible, whether they came from the New York City area or across the nation to support this wonderful event.

The USSA truly appreciates each and every one of you, and we look forward to seeing you all again.”

Morris concluded: “My congratulations go to my good friend Ray, who achieved his ambition by winning the most highest-quality Championship ever staged.”

As the 2016-17 snooker season concludes in the United States, the USSA would also like to thank its sponsors, Saluc, who manufacture the Aramith Tournament Champion snooker balls, Sterling Gaming and the Tweeten Fibre Co., who have all supported the association this season.