(From the European Pocket Billiard Federation by Thomas Overbeck) 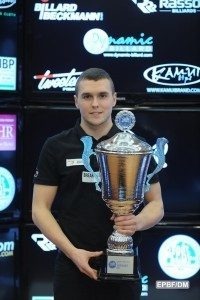 Mieszko Fortunski (POL) has just won the Dynamic Billard Italian Open with a 9:6 victory over Ralf Souquet (GER) in the final match. It is his first Euro-Tour victory ever.

The final match was determined by equal chances and play from both players. The decision came in the 14th rack. Fortunski was 7:6 up and players were taking racks in turns. With his breakshot coming up, Ralf Souquet got to the table but remained dry off the break. No ball was down and Fortunski had a shot at the 1-ball. He cleared the table and broke and ran another rack in order to win the tournament with a fantastic performance!

The semifinal matches were determined by close matches and high tension. The first semifinal between Fortunski and Jayson Shaw (SCO) turned out to become a hill-hill thriller. Both players played equally strong but Fortunski once again had the better ending. While luck was more or less a factor in that match, the other semifinal between Souquet and Nikos Ekonomopoulos (GRE) was as tight and exciting as the first semifinal but the outcome was determined by a bit of negligence. The first half of the match belonged to Souquet. He took a 6:4 lead and played quite well. Then Ekonomopoulos attacked and even overtook Souquet. He managed to get on the hill first with an 8:6 lead over „The Kaiser“. Souquet hung in there and tied the match at 8:8. The 17th rack was pure drama. After several safety shots, Ekonomopoulos started pocketing balls and looked like the definite winner. But he missed an easy 9-ball! Nobody expected Souquet to get back to the table. He found himself with a one rail shot on the 9-ball which he fired in the center of the side pocket to win the semifinal and proceed into the final match against Fortunski. However, Ekonomopoulos will probably remember that shot for quite some time.

The Women’s tournament will continue tomorrow morning at 10:00 CET with matches of the last 16 players single elimination. The tournament is played on 20 tables of which up to 12 will be in a livestream. In order to be able to follow all the action LIVE, premium membership can be purchased at www.kozoom.com. Once a premium membership is held, all events for the respective period of time can be viewed LIVE. Additionally, a huge video gallery is contained in the website.

The event is hosted by the European Governing Body for Pool, the European Pocket Billiard Federation (EPBF) and organized by International Billiard Promotion (IBP). For further information and reference please go to the federation website eurotouronline.com, visit us on Facebook or check out the EPBF youtube channel for regular news clips.