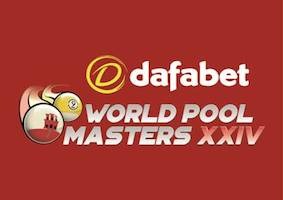 WITH TWO last minute drop outs due to visa issues, Matchroom Sport can announce the final line-up of the 24th Dafabet World Pool Masters, which gets underway tomorrow Friday, February 17 concluding on Sunday.

Cheng Yu Hsuan aka Kevin Cheng (Chinese Taipei), the 2015 US Open Champion, steps in to replace Wu Jiaqing (China) while Hall of Famer Mika Immonen of Finland comes in for Lee Vann Corteza.

Taking place at the Victoria Stadium, Gibraltar, the Masters sees 16 top international players competing in the shadow of the Rock of Gibraltar to determine the destination of the $20,000 top prize.

For Immonen, it is a great chance to put a World Pool Masters victory on his resume after many attempts, the nearest being an 8-6 defeat to Alex Pagulayan in the championship match in Las Vegas in 2008.

“This is one title I haven’t managed to claim so I grabbed at the chance to travel last minute from New York to Gibraltar. I feel as if I’ve got nothing to lose and I’m really looking forward to facing Albin Ouschan on Friday night,” said Immonen.

Cheng, a US Open winner in 2015 as well as runner-up at the China Open last year, also took a late opportunity to compete in his first ever Masters. He will face Naoyuki Oi of Japan on Saturday and will be well fancied in some quarters.

There are a total of five sessions of play and all tickets are available fromhttps://www.buytickets.gi/events/world-pool-masters-2017-87

Tickets are priced at £15 for the Friday evening and both afternoon sessions and £20 for Saturday and Sunday evening sessions. An all-session season ticket is £75.

The Masters will carry an $80,000 prize fund, and the event will be broadcast live for 20 hours in total. In addition, Matchroom Sport Television who will be making 15 x 1 hour programmes of the tournament for international syndication.