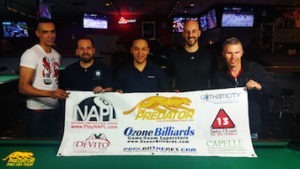 On the weekend of April 23-24, 2016, Steinway Billiards in Astoria, NY was again host to the Predator Pro/Am Tour’s legion of top amateur 9-ball competitors. The occasion was the tour’s seventh stop of the year, which would showcase a breakout victory for one of the tour’s dedicated regular players, Dan Faraguna. Although Faraguna had come close to the finish line a number of times over the last few years, a tournament win had eluded him.

Faraguna earned his place in the spotlight with an undefeated run to his first-ever tour win. Faraguna commented on his 1st place finish. “Winning a tour stop fulfills one of my longtime goals. I’ve been working hard lately on improving my weaknesses and becoming a more complete player…. I’m also fortunate and blessed to have met so many great people on the tour. Stronger and more experienced players have been generous with advice about how to play the right way, the mental game, maintaining your composure, and keeping things in the proper perspective – for that support I am very thankful.”

Coming through the lower side of the bracket (B to D ranked players), Faraguna (“B” handicap) worked his way to the top with wins over Fred Bondoc (7-5), Chris Kelly (7-5), Mike Harrington (7-2), Danny Recinos (7-6), and Abel Rosario (7-6). This run positioned Faraguna in the “hot seat” match, where he took on the undefeated player from the upper bracket, Fernando Paulino. Paulino (rated “A++,” the highest amateur handicap on the tour) previously scored an 8-6 win over James Stevens, which punctuated a string of decisive wins. In their meeting for the “hot seat,” Faraguna ended Paulino’s successful run by a score of 9-7, re-routing him to the loss bracket.

Although Steinway manager Manny Stamatakis (rated “A”) only had two successful rounds in the winner’s bracket, his run was far from over. After losing in round three to James Stevens, Stamatakis proceeded to make tracks in the loss bracket, winning six straight matches. To make it to the quarter-final, Stamatakis avenged his earlier loss to Stevens, defeating him 7-3.

Joining Stamatakis in the quarter?nal was Abel Rosario, the final player left standing on the loss side of the B/C/D bracket. Rosario gave a strong performance in the winner’s bracket, only to lose to Faraguna 7-6. He followed up with a 7-1 win over Andrzej Kaldan. The battle for the quarter-final was a close one, but in the end, Stamatakis pulled away to win it 8-6.

In the semi-final, Fernando Paulino put an end to Stamatakis’s comeback with a ruthless 7-1 victory, giving Paulino a second chance against Faraguna in the modfied single-race ?nal (race to eleven unless Faraguna reached nine games first). In a suspenseful finish, the players went down to the wire, tying at 8-8, before Faraguna put away his final needed-rack to win the match, conquering Stop #7 at Steinway.
Alongside the second day of competition at Steinway, “Second Chance” and “Third Chance” tournaments gave players who had been eliminated from the main event a shot to stay in the action.

A full field of sixteen players competed in the “Second Chance” tournament, which was ruled by “C”-rated player Omar Chavez. In this event, Chavez defeated William Finnegan, Christina Li, and Akiko Taniyama to make it to the final, where he took down a 9-5 win over Thomas Rice.

In the “Third Chance” event, Dany Recinos and tour director William Finnegan landed at the top of the eight-player field, with Recinos taking the win.