(News from the EPBF by Thomas Overbeck) 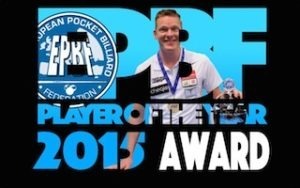 Starting today (Feb. 11), the public voting can be done on https://europeanpocketbilliardfederation.com/player-of-the-year/

Nominees for this coveted trophy are:

They have all performed extremely well in 2015 and would all deserve the trophy. However, there can only be one player holding the title in the end.

The voting consists of three parts:

All points through the three channels will be added and lead to the winner who will be presented during the player’s party of this year’s European Championships for Men, Women and Wheelchair Players in St. Johann, Pg., Austria.

Support your personal favorite and give your vote TODAY!

Europe’s Player of the Year 2015 – the vote is on!
Tagged on: European Pocket Billiards Federation