Just in from Dragon Promotions.  The two western world pool champions will now add the hottest player in Europe onto their side. World Champion silver medalist and China Open pool champion Albin Ouschan of Austria will now make it a trio of terrors on Team West as they aim to gun down Asia next month. European and American champions will go against Asia’s champions on November 19th at Resorts World Manila Casino & Hotel in the inaugural Kings Cup!

In what surely will become the most epic rivalry in cue sports, the pool world is about to get rocked in a war that fans have been dreaming about for years. Dragon Promotions is pleased to announce the Kings Cup, a first time ever event pitting the men’s champions of Europe & USA versus the champions of Asia in a three day contest to declare which side is the strongest, the East or the West.

On November 19th-21st  2015, the world, as well as the players themselves, will find out!  Four players on each side will be selected to represent their continent. The Kings Cup will be hosted by the award winning Resorts World Manila Casino & Hotel and produced by Dragon Promotions. The event will be played on the beautifully designed Rasson Table using Andy Cloth, Viking Cue, Pool & Billiard Magazine, and Billiards Digest are also co-sponsors. 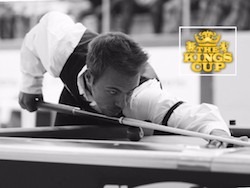 “I will do my best to integrate very fast onto the team!” said a very enthusiastic Ouschan on his selection to the Euro/USA team of champions. ” I’m honored and very excited to play this event in Manila, one of my favorite cities in the world!”

The timing is great for Team West as Ouschan’s steady rise to the top of Europe has been progressing like clockwork since the 2014 season where he finished silver at the World Championships, barely losing 13-11 in the finals. Albin achieved #1 World Ranking for the first time in his career this year and he just won the last European Pro Tour stop last week.

“Albin is young and hungry. We need someone like that on the team” explained Captain Mika Immonen of Finland. He further adds, “Albin will most likely be in the Mosconi Cup versus USA, so this experience playing in the Kings Cup against Team Asia in front of a tough home crowd is going to be rough. So it’s really good preparation for him for anything afterwards.”

The young but super solid Ouschan will join legends Darren Appleton, Mika Immonen, Efren Reyes, & Francisco Bustamante in what’s sure to go down as one of the greatest rivalries ever.

The Victory made by Rasson and will be used during the Kings Cup along with Andy Cloth & Viking Cue.

“Honestly, I’ve never seen Albin play before. This might be the first time we invited a player to a Dragon Promotions event on a stage and scale this big, and me not ever watching that player hit a ball before. But I’m very aware of his results, his wins, and the people he’s beaten to get to here. I’m saying all this not to discredit him, as a former pro I know what it takes to do those things he’s done. So on the contrary, that’s how damn impressed I am…that I don’t need to see him play” said Kings Cup executive producer Charlie Williams of Dragon Promotions.

The 25 year old Ouschan showed promise early on in his career, following in the footsteps of his very well known world champion sister Jasmin Ouschan. Albin dominated Austria in the juniors with 20 national titles, and was a 5 time European youth champion. He then had a breakout year in 2012 with his first European Pro Tour win. But the last 12 months have been a revelation as he has seemingly leaped into stardom starting off with making it to the finals of the World Championship, winning the extremely tough China Open, achieving World #1 status, and then recently winning another Eurotour event putting him at #1 in the rankings. Now in the Kings Cup, Albin can solidify that he belongs with the world’s elite on November 19th.

Twice World Champion Darren Appleton forebodes the long road ahead and ultra rivalry against Team East.
Appleton says, “Albin deserves his place on the team and his confidence and current form will help us a lot against Asia. This will be a great experience for him for the upcoming Mosconi Cup in America. He is going to get his feet wet very early in the Philippines, the toughest place in the world to play pool against a hostile crowd. So Vegas will feel like a cake walk for him after the Kings Cup.”

The next members of both teams will be announced this week and next.
Follow the Kings Cup at www.facebook.com/kingscuppool and visit www.KingsCupPool.com for updates.
Fans and sponsors can e-mail dragonpromotionsnews1@gmail.com