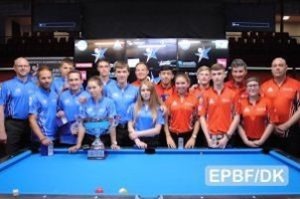 With a more than clear and impressive overall score of 11:2, Team Europe won the 2017 version of the Atlantic Challenge Cup.

After the disastrous day yesterday, team USA started out better today. The first two matches were mixed doubles. Leading 7:1, Europe had a big advantage and could enter the arena more relaxed than the US team. The first scotch double was played between Maksim Dudanets and Kristina Tkach versus Ricky Evans and April Larson. Though the US players contended much better than yesterday, they still made mistakes in their pocketing and – even worse – in their shot selection. Instead of going for a good safety shot, they went for the rail shots and most of the time missed them. Still, the first match was quite close and the Europeans were able to win it in the end with 6:4. The second scotch double was even closer. Patrick Hofmann and Diana Khodjaeva went hill-hill against Shane Wolford and Sierra Reams. Rack 11 was the decider in that match. Sierra Reams broke the rack and came up with an illegal break. Both teams exchanged safety shots and none of the players was willing to take any risk while at the table. The safety shots from the European team were better in the end and Shane Wolford had no other chance but trying to hit the 2-ball without committing a foul. He succeeded in doing so but left a shot for Khodjaeva who pocketed the 2-ball and paved the way for herself and Patrick Hofmann to win the rack and the match with 6:5. That took team Europe to 9:1 over team USA. The following individual match between Wiktor Zielinski and Manny Perez also turned out to become a heartbreaker. At 5:5, Zielinski missed the 6-ball with only the 8-ball and the 9-ball on the table. The following safety exchange was won by Perez who consequently took that rack to take team USA to 2 points in the overall score.

The evening session started with another individual. Daniel Maciol was up against Nathan Childress, the youngest player of the US team. That match became a clear affair for Maciol with 6:2, mainly because childress took the wrong shots and his nerves played a trick on him when he tried to pocket difficult or deciding balls. With that victory, team Europe was on the hill with11:2 over the US Americans. One more point needed for the Cup. That point was earned in the scotch doubles between Wiktor Zielinski and Diana Khodjaeva and Manny Perez and April Larson. Though Perez and Larson were probably the strongest of all US team players, they did not have chance against the Europeans today. 6:3 was the clear result that brought the Atlantic Challenge Cup to team Europe when the youngest team member Wiktor Zielinski pocketed the decisive 9-ball.

„Our team came here with a lot of experience already,“ stated European captain Albin Ouschan, „the team is really strong. They have won many titles at European Championships so far and I knew I had a great team.“ „The fact that most of these youngsters regularly play the Euro-Tour where they compete with the top players of the game makes these kids even stronger and better“. „The take the right decisions in the respective moments. That is what is missing with the US team. We were much more experienced than them“, added Ouschan. Said US captain Johnny Archer „Europe definitely has the better team. That’s for sure, from top to bottom!“, Archer mentioned. „Although the score this year was one less than last year I think that this team we have something to built on. I was impressed with our team,“ Archer continued, „there’s still work to be done but I see things to be built on from this. I know we’re going to lose some players since they will be too old next year but there are players ready to come on.“ „One reason for this huge loss was we had a horrible day yesterday. 0:5 was just a dagger in the heart“, Archer explained. „Today we played better in the mixed doubles and we lost quite close. This shows that Europe does not give many opportunities away. When you do get them, you have to get advantage!“

That concludes the coverage from this year’s Atlantic Challenge Cup in Klagenfurt, Austria. The complete event was streamed for free on www.kozoom.com. Additionally, all matches will be shown on the EPBF Facebook page.