The most successful and decorated player in the history of Asia, possibly the world, will lead the East against Europe/USA on November 19-21st. Filipino icon Efren “Bata” Reyes has been chosen as Captain of Team Asia and will lead them against the West in what surely will become the most epic rivalry in cue sports.

The pool world is about to get rocked in a war that fans have been dreaming about for years. Dragon Promotions is pleased to announce the Kings Cup, a first time ever event pitting the men’s champions of Europe & USA versus the champions of Asia in a three day contest to declare which side is the strongest, the East or the West. On November 19th-21st the world, as well as the players themselves, will find out!  Four players on each side will be selected to represent their continent and compete in 10-Ball. The Kings Cup will be hosted by the award winning Resorts World Manila Casino & Hotel and produced by Dragon Promotions.

“Who else could be better than the greatest player of all time? Efren Reyes is an international superstar that has a big track record of success in team events. And he’s going to have an amazing supporting cast. The West will have their hands full”, said Charlie Williams, Dragon Promotions Executive Producer of the Kings Cup.

“Being named captain of Asia is a big responsibility. But I know our Team Asia players are all really good, so it’s going to be a joint effort together”, said Reyes. 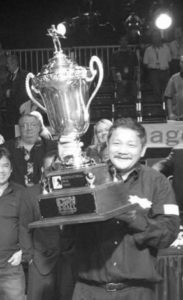 Bata after winning $500,000 from the World 8-Ball Open, which till this day is the largest payday of any billiard event in history.

Efren Reyes has a pedigree that is unmatched by any player in Asia. A true master of all disciplines, he has won the World 9-Ball Championship, World Bank Pool, World One Pocket, US Open 9-Ball, and numerous Asian Games and SEA Games gold medals. Reyes has also won the biggest prize money tournaments in cue sports history including the Million Dollar Tokyo Open and the World 8-Ball Open which paid $500,000 to him. He has also excelled in team play and won such events as the World Mixed Doubles and World Cup of Pool. He is widely regarded by other professionals as the greatest genius that the sport of billiards has ever seen.

“I’ve learned so much from Efren who has always been my idol. He has been a huge mentor and influence on me”, said Rubilen Amit, a 2-times Women’s World 10-Ball Champion and twice winner of the World Mixed Doubles with Reyes. Amit also led Team Asia as captain earlier this year in the AM8.com Queens Cup, which she credited Reyes to be a great influence on leadership skills. 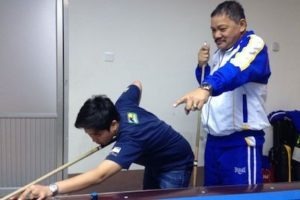 Reyes is masterful behind the players as well as in front of his own cue. Reyes and Amit embrace after defeating the USA in the finals.

The Queens Cup was broadcasted worldwide and exceeded ratings expectations. Many predict that the Kings Cup is going to be a gigantic hit as it touches upon the rivalry between the East and the West.

“The Kings Cup is a great concept. East and West are very closely matched in the world of pool, which is not common in other sports. It will be great to see how the hemispheres collide on the table. For sure the games will be very competitive”, says Bob Guerrero renowned football and billiards TV sports commentator and sports writer for Rappler.com.

“Kung lalaban ako sa pilipinas higit na mas mataas ang inaasahan sa sa amin / sa akin ng aking mga taga-hanga. Maraming pwedeng mangyari sa aking laro. Yung ibang mga lahi na aking makakalaban sigurado akong guston gusto nila akong talunin sa sarili kong bansa. Alam kong isa akong target sa kanilang lahat”, explained Reyes in his native tongue on what it’s like to be playing in front of his home crowd. “It’s always more pressure at home. The fans expect so much of me. Anything can happen because all the other players want to beat me in front of the world. I have a target on my back and I know it.” 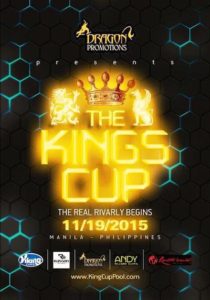 Hot off the heels of the Queens Cup earlier this year, Dragon Promotions and Resorts World Manila is continuing the hot streak of international billiards in Asia. The format of the Kings Cup  will follow in the footsteps of the successful Queens Cup. Teams will play in versatile styles including singles, doubles, triples, and quadruples each of the 3 days of the men’s competition. All matches will play 10-Ball.

The first member of Team West will be announced this week.