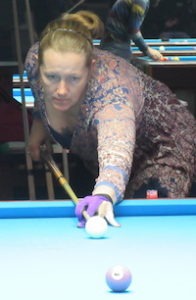 Gail Eaton, a.k.a. “Virginia Slim”, went undefeated amidst a hefty field of 43 semi-professional players to capture pool’s Gulf Coast Women’s Regional Billiards Tour 9-Ball Season Opener. Eaton faced off with Austin’s Jennifer Yo in the final, capturing the first set, 7-4, and her first victory of 2017.

On January 7th, 2017, some of the most talented female pool players in Texas and Louisiana converged on Bogies Billiards and Sports Bar in Houston, Texas, to compete in the one-day, $500 added 9-ball event, vying for a place in the Gulf Coast Tour winners’ circle. Room owners David and Shannon Richardson, along with tour sponsors Cyclop Pool Balls www.facebook.com/CyclopPoolBalls, Ozone Billiards www.OzoneBilliards.com, and the APA of North Harris County www.facebook.com/apanorthharriscounty, facilitated another successful event for the women of the Gulf Coast Tour, the first of 11 events scheduled for 2017. Growing by leaps and bounds, the WPBA sanctioned regional tour has already amassed a following of 55 player members this year, in addition to securing a new venue, CK Billiards, in Dallas, Texas. Last year the tour amassed 76 player members, the highest to date, and because this year’s numbers are already high, the tour anticipates breaking 100 player members before the end of 2017.

Seasoned tour veteran, Gail Eaton, took on one of the fiercest Gulf Coast fields in recent months, surging to the winners’ side final four with wins over Mona Nesh, 7-5, Cindy Tillman, 7-1, and newcomer Sandra Gonzalez, 7-2. Jennifer Yo took down Nancy French, 7-4, Terry Petrosino, 7-6, and Julie Enzensperger, 7-4, while Loretta Lindgren defeated Crystal Ayres, 7-4, Yvonne Asher, 7-4, and Ricki Casper, 7-6. Coming off a recent win at the 2016 Space City Open, Natalie Rocha ousted Liz Mitchel, 7-1, Diana Cardona, 7-2, and Kim Pierce, 7-2. As the final four on the winners’ side rounded out, the west side witnessed a comeback by numerous, top contenders. After suffering a 7-6 loss to Yo, Petrosino went through Mitchel, 5-3, Matty Sword, 5-3, and Pierce, 5-4, to reach the final eight. Kim Jenkins made her play, eliminating Celeste Espinosa, 5-3, Sara Bork, and Tillman, 5-1, until Casper ended her run, 5-1. Following a second round loss to Jennifer Yo, 7-4, French eliminated Gail Roles, 5-3, newcomer Emily Sumrall, 5-4, Cardona, 5-3, Mundie, and Enzensperger, 5-2, while Garland secured her bid with wins over Stacey Pelakakis, 5-2, Yvonne Asher, 5-4, and Gonzalez. Back on the east side, Rocha ousted Lindgren, 7-5, while Eaton defeated Yo, 7-4. Eaton went on to defeat Rocha for the hot seat, 7-5. On the one loss side, Casper eliminated Petrosino 5-4, but fell to Yo, 5-4, while Garland ended French, 5-3, but folded to Lindgren, 5-1. Yo was in high gear, booking her third win with Rocha, 5-4, and earning herself a shot at Eaton. In the final match, Eaton came out firing, but Yo refused to go down without a fight. Players traded games until Eaton pulled away, winning the first set, and her first victory of the year, 7-4.

The Gulf Coast Women’s Regional Billiards Tour is open to players of all ages and skill levels, however, the top 32 WPBA Exempt Professionals are not permitted to participate. The next Gulf Coast Tour 9-ball event will be held on February 11th, 2017, at Bogies West, 9638 Jones Road, in Houston, Texas. This event will be played on 8’ tables with Cyclop TV Set Pool Balls. Free practice begins at 10am, and the mandatory players’ meeting begins at 11am. For more information about the WPBA sanctioned, Gulf Coast Women’s Regional Billiards Tour, visit GulfCoastWomensTour.com. Follow us on Facebook @gulfcoasttour1 and Twitter @gulfcoasttour.