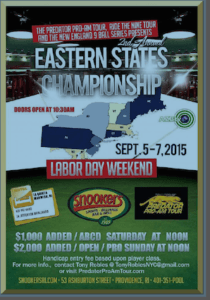 According to the presenters, “The Eastern States Championship was a HUGE Tournament that took place many years ago which many considered the equivalent of the U.S. Open! Every top player in the country showed up to play each year and the competition was every bit as tough as any major tournament. But this will mark the second time that we will have an Eastern States Amateur Championship along with a Pro event. Special thanks to Snooker’s owners Steve & Regina Goulding as well as Raymond McNamara and the Snookers staff and to Gloria Jean and Marc Dionne for their willingness to work together to grow our sport!”

The event will be streamed live by UpState AL!  You can view the stream online at  AZBtv