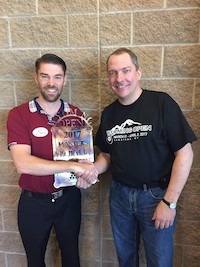 The Prince of Pool is royally beating the competition as he is leaving no room for any other winners. Corey Deuel came up short last year with two runner-up finishes, but this year he has already taken down the first 2 pro titiles at the 10th AndyClothUSA.com Wyoming Open.  The 7 division pro and amateur tournaments event filled up with 300 players in the fields 6 weeks before the tournament date, a new record. The popular event features 8-Ball, 9-Ball, 10-Ball, Saratoga, the Women’s WY Open, and the Wyoming State Junior Championships disciplines to be mastered at the 3 day Rocky Mountain pool extravaganza. In addition, the livestream is free and filmed by www.OnTheRailTV.com .

Deuel cruised through his first 3 matches over Tom Bourdeon, Brian Jackson, Chad Shoulders before overcoming multiple Wyoming Champion and fellow tour pro Rodney Morris in the semi-finals. Johnny Archer kept Mike Massey in 3rd place as well, before meeting Deuel in the finals. Archer got to the hill first, but a dry break gave Deuel the opening to run-out and take the Masters 10-Ball , the first Wyoming Open title of the event.

“I feel like I’m playing pretty good 10-Ball. I’ve always considered it my worst game, but I’ve won two 10-Ball events so far this year. I always feel good here in Saratoga at the Wyoming Open because the town is so behind the tournament”, said Deuel. Corey was sporting a new longer hairdo along with a beard. Perhaps bringing extra luck for a possible sweep of all 3 pro events?

In the Saratoga Masters, which is a combination of 8-Ball and 9-Ball rules combined, Deuel once again showed his prowess in strategy, cueball control and kicking. He went through the field unscathed and met the unseeming Ruben Silva in the finals. Silva, a local player from Colorado Springs, turned heads when he defeated Johnny Archer 6-2 and then Rodney Morris 6-2 in back to back matches. But he couldn’t pull off the trifecta as he fell to Deuel in the hot-seat, but again defeated Morris 5-2 to re-match against Deuel. But Corey’s game was too much for Silva to handle as Deuel easily won 9-3 in the one race finals. Still a major accomplishment for an amateur player. See Silva’s interview after his 2 historic match wins: click Ruben Silva Interview

“Saratoga is the best game I’ve ever played on the bar table. The kicking especially is important which suits my game”, said Deuel before the finals.

Deuel now holds 2 of the first 3 Wyoming Open titles and will enter the 3rd and finals day playing the 8-Ball Masters. The field will be strong with the likes of Archer, Morris, Raj Hundal, Mike Massey, Peter Nielsen, and local talents such as Ruben Silva. But Corey’s new good luck beard may just hold-out for pool history.

Ruben Silva kept Archer in his chair and managed to duplicate that winning form against the Rocket twice.

“The Wyoming Open is the largest event of the year of any kind for the town of Saratoga. Every hotel room available in town is booked solid, and it gives all the businesses in town a huge boost”, explained Mayor Ed J. Glode.

The event is co-promoted by Dragon Promotions and is renown to be the biggest pro/Amateur pool event in the surrounding states drawing over 300 players. From beginner, intermediate, expert and pro/open level tournaments will all be available . The Wyoming Open is kicking in $10,000 this year to the entry fees to sweeten the purse with nearly $30,000 to be paid in cash prizes. The event is sponsored by widely popular Andy Cloth with local partners include Duke’s Bar & Grill, the Hotel Wolf & Restaurant, and the Riviera Lodge with all events coordinated by Shively Hardware. In addition, the livestream is filmed by www.OnTheRailTV.com for a completely free stream.The Wyoming Open is organized and promoted by Shively Hardware & Dragon Promotion. The event is majorly supported by the town’s own businesses which include : Hotel Wolf, Duke’s Bar & Grill, Riviera Lodge, Red Sage Spa, Pik Ranch, Carbon County, Bella’s Bistro, Lollypops, and Shively Hardware. Andy Cloth was founded in 1973 and has become one of the premier professional playing cloths in the world today. AndyCloth USA is based in Saratoga, Wyoming and has quickly impressed critics and professional players worldwide. Andy Cloth is used exclusively in major international events such as The Queens Cup, Women’s World 9-Ball Championship, USA’s 103 year old World Tournament of 14.1 , The China Open,The Beijing Open,  the International 10-Ball Championships in Philippines, the Wyoming Open, the High Desert Shootout, the Women’s International Pool Championship, and many more. Andy Pro Tour Cloth is specially designed for the American pool player market. It is engineered for weather conditions, longevity, ball reaction, and speed. It is the most superior professional performance playing surface on Earth. Visit www.andyclothusa.com

For more info and to follow the WY Open goto www.facebook.com/wyomingopen. For more info or to play in the Wyoming Open contact wyomingopen@gmail.com or call 307-329-8924. visit www.wyomingopen.com  and on Instagram.com/WyomingOpen and on Twitter.