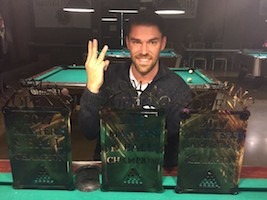 Saratoga, Wyoming-  “They’re going to have to start giving away participation trophies next year because of Corey”. That was the statement made by former US Open Champion Rodney Morris, the player with the most success in Wyoming. The “Prince of Pool” Corey Deuel showed his mastery of all games as he took first place prize in the Masters 10-Ball, Masters Saratoga, and the Masters 8-Ball at the 10th AndyClothUSA.com Wyoming Open. But it wasn’t the finals he expected in two of them.

The Wyoming Open consisted of 11 divisions of pro and amateur tournaments event that filled up with 300 players in the fields 6 weeks before the tournament date, a new record. The popular event features 8-Ball, 9-Ball, 10-Ball, Saratoga, the Women’s WY Open, and the Wyoming State Junior Championships disciplines to be mastered at the 3 day Rocky Mountain pool extravaganza. In addition, the livestream was free and filmed by www.OnTheRailTV.com .

Local player Ruben Silva kept his hot streak of pros falling to his cue sword with a win over India’s Raj Hundal this time. He had already previously defeated Johnny Archer and Rodney Morris twice in the Saratoga Masters. He cruised to the finals for a re-match with Deuel, the only pro he had not defeated yet.

Deuel’s road was a bit tougher as he drew Danish Champion Peter Nielsen his first match, and then defeated Rodney Morris, before winning a hill-hill thriller over local Johnny Vasquez who defeated Johnny Archer earlier. After surviving that bout, he easily overcame Chris McDaniel to make his third consecutive finals. 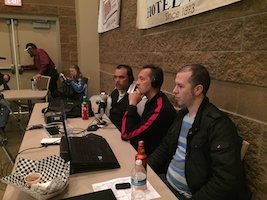 Nielsen and Morris commentated the finals during the live stream provided by Lenny Marshall’s OntheRailTV.com

The finals had a lot at stake. Deuel had the chance to be the first player to ever sweep all 3 pro events at the Wyoming Open, while Silva could win his first pro-am title and become one of the very few players not on the pro tour to ever win the Masters.

Deuel started off strong with a 3-1 lead. A botched shot gave Silva an easy game and then 2 break and runs turned the tide to 4-3 in his favor. The crowd was sensing an upset as the pressure was mounting. But a missed open shot in the next game gave Deuel an opening. Corey however missed position and was left no open shot and it looked like Silva would be on the hill momentarily. Then Deuel took aim at an off angle combination down the rail the length of the table. An extremely difficult shot, especially with the match hanging in the balance. He made it.
(Click here The Greatest Shot  Andy Cloth Facebook page to see the video clip of the shot!)

Deuel then played defense the next match, and Silva clearly did not want to engage Corey in a strategic game, so he went for a very difficult out and nearly did it until he missed a straight in 8ball into the side pocket when the cueball rested near the rail. Deuel ran out and then broke and ran a difficult rack for the win.

“I didn’t think Corey could get through that last rack”, said Hundal impressed by the maneuvering of Deuel’s cueball.

“I was frustrated when I missed position at 3-4 down. But I told myself to get over it, and I took on that tough combo. I really didn’t have any other shot. I wasn’t thinking about the three event sweep until today after I beat Rodney. I thought I had a good chance to do it because 8-Ball is one of my best games”, said Deuel. 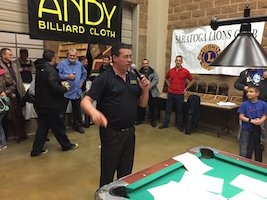 “I’m really happy. I’ve won my last 4 tournaments in a row starting back to Washington state last week. And this is the first time I’ve ever swept all the events at any tournament. So these trophies are definitely keepers!”, finished Deuel. 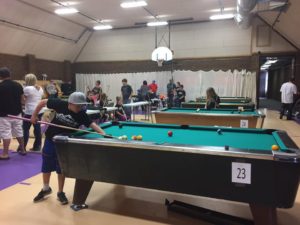