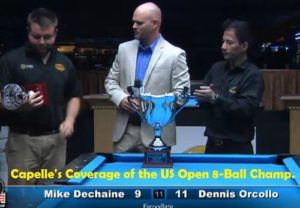 THE FINAL DAY OF PLAY
The standout feature of the final five matches was how hotly contested they were – in races to 9 and one to 11, four of five were decided by two games. Below are the stories on the matches.

Match #1 – 5-6th or BETTER
RAFAEL MARTINEZ CHAVEZ over SHANE VAN BOENING – Forfeit
Van Boening mistakenly thought he was to play at noon, not 10am, so he failed to show up on time for his match, and lost by forfeit to Chavez. Chavez played very well in losing a close match to Orcollo, 9-7, so while a win by Van Boening seemed likely, it was no sure thing. If Van Boening had played and won, he would have then played Orcollo, and perhaps we would have had a different champion. But, as you know, this is nothing more than idle speculation.

Match #2 – 5-6th or BETTER
DENNIS ORCOLLO 9 – JOHN MORRA 7
Morra won the first two games after some sloppy play by both players. Then came one of the two moments that defined this match, and ultimately the tournament when Orcollo missed position, but kicked in the 8 ball! He followed this luck/skill shot with super tough runs to win games 5 and 7. Then, when the cue ball hit off another ball and scratched on Morra’s break, Orcollo ran out to tie the score at 4-4. The two traded break and runs over the next 7 games, at which point Orcollo led, 8-7. It looked like Morra would run out on his break, but he committed a huge blunder when he overran his position zone by an inch, froze on a ball, and had no viable shot. He missed a super tough kick, Orcollo ran out, and he escaped with a hard fought victory, 9-7

Match #3 – 4th or BETTER
DENNIS ORCOLLO 9 – RAFAEL MARTINEZ CHAVEZ 7
According to FargoRate (an odds making program which was always at the bottom of the screen on the stream) the chances of Orcollo winning at the start were 82% to 18% for Chavez. But no one told Chavez as he fought Orcollo to a tie after the first 8 games. When Chavez missed a long bank in game 9, Orcollo ran out, then ran the next 3 games as well – two coming after Chavez came up empty on his break!

Orcollo now lead 8-4, but Chavez countered with a run when Orcollo knocked the cue ball off the table on his break, broke and ran out, then ran out again after Orcollo missed a bank. Chavez, the 4 to 1 underdog, had now closed the gap to 8-7. But he made a fatal mistake when he missed his first shot in game 16 and Orcollo closed out the match.

Match #4 – WINNER’S BRACKET FINALS
MIKE DECHAINE 9 – RODNEY MORRIS 8
Morris opened impressively with a break and run, and won the second game after Dechaine hooked himself after making the ball before the 8. Dechaine won the third game after Morris failed to make a ball on the break. Game 4, a 7 turn long affair, was a comedy of errors from which Dechaine emerged with a W to tie the score at 2-2. Five of the next 6 games featured break and runs, so after 10 games Morris led, 6-4.

Morris then made a big error and lost game 11, allowing Dechaine to pull to within one. Missed shots in each of the next three games resulted in two wins for Dechaine, one for Orcollo – so after 14 games the score was knotted at 7 all. They each broke and ran, setting the stage for a double hill game. Morris broke, missed position, then missed a tough shot and Dechaine ran out to secure his spot in the finals.

Match #5 – LOSERS BRACKET FINALS
DENNIS ORCOLLO 9 – RODNEY MORRIS 1
Dennis Orcollo played perfect pool in beating Rodney Morris, 9-1. He broke and ran 5 racks in 5 attempts. And, on the 4 racks where Morris failed to make a ball, he ran those out as well. The only game Orcollo lost came when Morris hooked himself on the ball before the 8, made a long distance kick with a give-up stroke, then kicked in the 8-ball.

Match #6 – THE FINALS
DENNIS ORCOLLO 11 – MIKE DECHAINE 9
This promised to be an epic duel, and it was as the players broke and ran 11 of 20 games and otherwise showcased their considerable offensive firepower. Dechaine took advantage of Orcollo’s failure to open a cluster in the first game, broke and ran twice, and ran out again when Orcollo failed to make a ball on the break, staking him to a 4-0 lead. Orcollo answered with a break and run, then won game 6 when Dechaine missed a makeable shot. The momentum had quickly shifted in Orcollo’s favor and he continued with another break and run, then won game 8 when Dechaine broke dry, tying the score at 4-4!

In game 9 Orcollo violated the law of study long, study wrong, made a mistake, and lost after scratching when Dechaine cleared the table. But he ran out when Dechaine failed to make a ball on his break. The two then matched break and runs in the next four games, so after 14 racks the score was tied at 7-7.

Orcollo worked his way into a jam, managed to make a bank, but scratched and Dechaine ran out, then broke and ran the next game to take a 9-7 lead in this race to 11. It looked like Dechaine now had at least one hand on the trophy, but Orcollo, broke and ran out. The pivotal moment came in the next game when Dechaine turned the cue ball loose and scratched. Orcollo took ball-in-hand and ran out, then broke and ran to reach the hill at 10-9. After he did not sink a ball on his final break, all Dechaine could do was watch from his chair as Orcollo ran out for the title. Dechaine’s first move after the game was over was to rise from his seat and extend his hand to Orcollo, a most deserving champion!