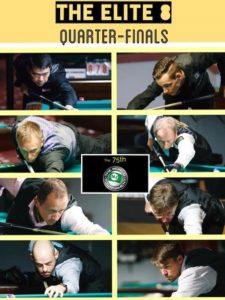 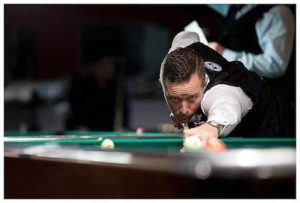 After scoring a single ball, Shane Van Boening then put together a near perfectly executed run of 135 before inexplicably missing an easy shot to take a 136-49 lead over Danny Harriman, who had opened with a nice run of his own. Van Boening then closed out the game on his next turn!

Thorsten Hohmann ran 136 balls with his trademark brand of precision position and pattern play. His run ended when he missed a long shot after being forced to take a little risk on a late rack cluster break. Orcullo then took at least a 10 minute break to prepare himself to make the most of his inning. I might add that a piece of chocolate cake appeared at his table! He did manage a long run, but ended up losing to Hohmann, 200-103.

Joshua Filler and Jayson Shaw made plenty of mistakes and Shaw suffered through a few unfortunate scratches, so Filler, the 17 year old phenom, advanced to the quarterfinals.

In the be-careful-what-you-wish-for department, Johnny Archer was behind me for a while rooting quietly for Strickland to beat Harriman on Thursday. He did, and Archer was then eliminated by Strickland on Friday!

Mika Immonen opened his match against Darren Appleton by spearing in a long shot and running over 40 balls, but Appleton eventually prevailed as he continued his defense to his title.

For additional information and for the live stream CLICK HERE