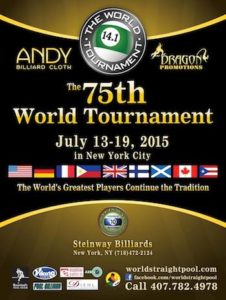 For additional information and for the live stream CLICK HERE
The other 4 matches will be on the secondary stream.

The field for Thursday’s play included 8 group winners who received a first round bye and the other 16 players who finished in the top 3 in their groups of 7 players. The names of the 16 players who advanced to the single elimination phase today are in all caps. They will be playing to 200 points. Those 8 players who win will qualify for tomorrow’s quarterfinals and semifinals.

Of the 8 group winners, 5 were undefeated, and 3 remained that way as Shane Van Boening, Darren Appleton, and Warren Kiamco Improved their records to 7-0. Since we are now in the single elimination phase of the event, should any of these three go on to win the tournament, they would have a perfect record of 11-0!

Van Boening, who finished second to Appleton last year, beat Mika Immonen. Joshua Filler, the 17-year old phenom, was on a run of 93 against Darren Appleton when he called a foul on himself and eventually lost the game, 150-138. Warren Kiamco prevailed over Earl Strickland to advance to Friday’s play.

Among the other 2 players who were undefeated going into Thursday’s action, Reiner Wirbitzki lost to Sean Wilkie, then beat Danny Barouty, who was inducted to the Hall of Fame Wednesday night, to make it to the round of 16. Stephen Cohen, who won this event in 2009, lost to Johnny Archer and was eliminated by Danny Harriman, who ran 135 balls.

In sum, 6 of the 8 group winners still have a shot at the title. They will be joined today by 10 of the 16 non-group players who survived the cut on Thursday. Some of the highlights from Thursday’ play:

Earl Strickland ran 125 to beat Harriman, 150-2. After losing to Kiamco, he then took on home town favorite Tony Robles in a featured match on the TV table. Robles put together a long run to move into a lead of 83 to 43, but then he missed a difficult carom shot and the Pearl ran 107 and out in an artful display of precision position and superb shotmaking. Strickland had said at the banquet on Wednesday that straight pool is now his favorite game, and his play has certainly showed that his love for 14.1 is for real.

Dennis Orcullo beat Steve Lipsky, then orchestrated the high run of the event, running 152 and out in defeating Gomez, his fellow Filipino, to reach single elimination.