Monday (July 13) was the first of seven days of straight pool at Steinway Billiards in Astoria, Queens. There were 55 players in the field when brackets were posted yesterday, but Ivica Putnik filled out Group 5, and Dieter Johns took Mike Dechaine’s place in Group 7. Now the field is full at 56, so 3 of the 7 players in each of the 8 groups (24 in all) will qualify for the double elimination phase on Thursday.

There was much talk about Dechaine’s decision to not play (I think it had something to do with his seeding in his group)… At any rate, his dropping out may be a big break to Dr. Elliot Eisenberg, a friend of mine since our college days at Berkeley, California. Eisenberg had a run of 48 on his way to beating Johns and is now 2-0. 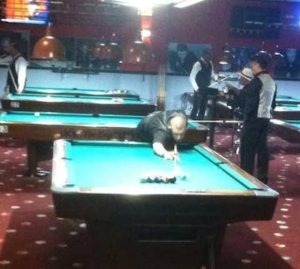 The photo that you see is of Jayson Shaw as he is preparing to play a break shot. Notice that his cue is under his inside eye! Shaw is playing Ron Dobosenski from Wisconsin who, it turns out, used to play in the same room as Eisenberg did over 40 years ago! Dobosenski had won a qualifier to get into the event, and he held a 35-1 lead before Shaw ran 99 and out. The games are to 100 points, but I did not hear of any longer runs, so this may have been the highest run of the day.

Shane Van Boening ran a 305 on Sunday in practice, which is just past the 300 points that it will take to win Sunday’s finals. Apparently that lofty total is now within his 1-inning range!

I spent much of the day visiting with various members of the pool world, and capped my day by watching Thorsten Hohmann win a close game against Randy Hanson while enjoying the company of Shamika Cotton. Shamika really loves straight pool, and is an avid fan of the game. In the course of our conversation I learned that she played a big role in The Wire (one of my all-time favorite TV shows), Forever, Law and Order, and others! This proves, once again, that you can meet some of the friendliest and most interesting people in a pool room!

I will be heading to Steinway for Day 2 –  and perhaps I will see you there!

For additional information and for the live stream –  CLICK HERE