The Junior players will compete in USA during 2016 second annual competition! The Billiard Congress of America today announced the 2016 Atlantic Challenge Cup will be staged July 8 – 11, 2016 in Chicago at the Renaissance Schaumburg Convention Center.  Specific match times will be announced at a later date. 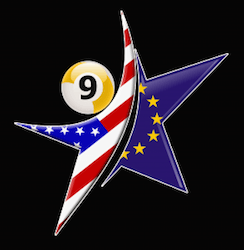 “Last year’s was unbelievably thrilling in terms of nail-biting competition, positive promotion of the game, wonderful display of sportsmanship and great partnership between billiard organizations in Europe and the United States,” said Billiard Congress of America Chairman Mike Serra.  “It will be a pleasure to entertain both the American and European players in one of America’s finest cities.  However, after losing by just two points in the inaugural event, we look forward to winning the Cup on American soil in 2016.”

“We are really excited to be going to Chicago and we know it will not be an easy task to defend the title we won so dramatically this year.  You saw the way team USA fought back so we know what to expect when the time comes. Team Europe will be set after this year’s world championships in China so we will have enough time to prepare them for the battle that lies ahead,” said David Morris, International Billiard Promotion Foundation President.

Launched  by the Billiard Congress of America and European Pocket Billiard Federation in 2015, the Atlantic Challenge Cup pits the best of youth from Europe and America in a Mosconi Cup style event in a race to 11 with a possible 21 total matches.  Six players on each team, four boys and two girls, will battle it out to see who will have the bragging rights across the Atlantic. The 2015 Atlantic Challenge Cup was captured by Europe in a thrilling 11-9 competition spanning four days in July in Rankweil, Austria.

Additional details on the 2016 Atlantic Challenge Cup will be announced soon.