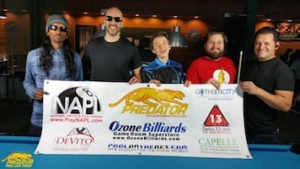 After just one week had passed, Predator Pro/Am Tour Stop #7 winner Dan Faraguna brought his “A” game to the tour once again. At tour Stop #8, held at Cue Bar in Bayside, NY on April 30-May 1, Faraguna went undefeated to capture his second straight victory.

To start the event, Faraguna (rated with a “B” handicap on the tour) had two dominant 7-2 wins over Tommy Schreiber and Nicole Monaco before he pulled out a narrow 7-6 win against Chickie Romero in the B/C/D bracket. To continue on to day two in the winner’s bracket, Faraguna took a 7-4 win over Pablo Sanz, then secured his spot in the “hot seat” match after a “hill-hill” win over Erick Carrasco (7-6).

In order to make it to the final, Faraguna had to get past former tour stop winner Shawn Sookhai (B+). Earlier, Sookhai defeated Elvis Rodriguez (A) by a score of 7-1 to secure the top spot in the upper bracket. In their match for the “hot seat”, Sookhai and Faraguna went down to the final game, and Farguna escaped with a 7-6 win to move on to the final.

Another notable story from Cue Bar came out of the loss side of the bracket, where junior champion Lukas Fracasso-Verner fought through a string of battles to mark one of his best tour finishes yet. After he lost his very first match of the tournament to Rene Villalobos (7-6), Fracasso-Verner went on to win nine straight matches and land in the semifinal, after a quarterfinal win over Elvis Rodriguez (7-3).

For the final match, Faraguna and Sookhai played a “modified” single race to seven. As the undefeated player, Faraguna would win if he reached seven first, otherwise the set would be extended to nine games. Their battle for the final took a similar path, as Faraguna held off Sookhai in their final game, winning the match by a score of 7-6 to become the undefeated champion once again.

For the players who had been eliminated by the second day of the tournament, a “Second Chance” tournament was held to offer another chance to stay in the action. In this single-elimination event, Rene Villalobos (B) went through to the final to face off against Del Sim (A++). Villalobos was successful in holding Sim back, and he walked away with a 9-4 win. Villalobos took $120 for the win, while Sim earned $60.

Dana Faraguna Wins Back to Back on Predator Tour
Tagged on: Pool and Biliard Magazine DAILY    Predator Pro Am Tour