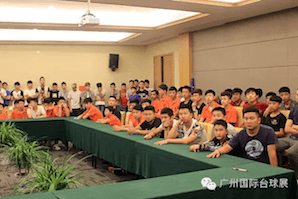 The China Youth Snooker Series (Nanjing Race) hit an all-time record. The 2015 Jiangning·Hengxi China Youth Snooker Series Shitang Cup (Nanjing Race) Open Tournament was held in Students Sunshine Sports Camp Hall on September 22nd. As the second race of the young and middle-aged series, it had attracted 66 snooker players in the youth group and 22 in the early youth group.

The line-up of the race was extremely strong, all top players participated, except for Zhang Yong and Zhao Xintong who had got professional qualification and international championship substitute qualification respectively.

The 10th China Guangzhou International Billiards Exhibition(GBE2016) will take place in area A of China Import and Export Fair Complex during March 9th-11th, 2016 where a learning and communication platform will be set up for billiards enthusiasts.

You can catch all the latest GBE news on the website www.gbechina.com, “followe us” on our Twitter page (@gbechina), or contact Ms. Eve Cheng via grand.ev@grahw.com