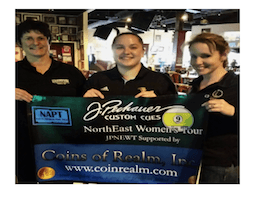 A strong and thrilling stop at Champion Billiard Sports Bar in Frederick, Maryland, for the J. Pechauer tour kicked off June 24th with 29 players. The two-day event was jam-packed with some serious competition, visible in the final match, which consisted of not only WPBA hall of famer Karen Corr, but also, 6-time Junior National Champion and ACUI Collegiate Champion, Briana Miller. Both had challengers on their way to the top, and met each other part way through. As a major feather in the 21-year-old’s cap, Briana sent Karen to the B-side. Briana also later won the hot-seat match 7-2 against accomplished regional champion, Tina Malm, and awaited the return of Karen Corr in the finals. 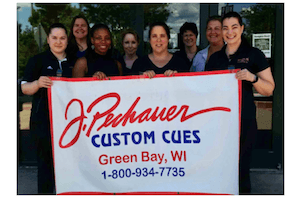 The finals weren’t the only highlight of the tournament, however. Gwen Townsend, recently returning to regional tournament play, was up 2-0 at the start of her match against Karen on Sunday, and finished with an impressive 7-5 score. There were several runouts for both players in that match, including the first rack by Gwen from the 3 ball. This was not an easy task against a legendary player, especially on the stream table. Ultimately Karen took back control, as did Tina Malm in her match against Townsend. Tina emerged victorious from her first round match with Gwen 7-4, and went on to claim victories against Heather Platter (7-1) and recent hot-streak player, Nicole King (7-5). Both Heather and Nicole carried on to share 5th-6th place, and a notable finish of 4th from Eugenia Gyftopoulos was recorded.

As the top 3 ladies were not eligible for the qualifying spot at stake this tournament, as they were already qualified, Eugenia took home the valuable prize. She will get to choose free entry into either the Las Vegas event in November, or the Chicago event in August, of the NAPT Division 1 tour. Congratulations, Eugenia! Her run was stopped in the quarterfinals by Karen Corr (7-0) and her first loss was given by the other finals participant, Briana (7-5).

Briana started her undefeated journey to the finals with a challenge from Judie Wilson (7-4), going on to defeat Teri Thomas (7-0), and then met the great Karen Corr third round winner’s side. Karen had at that point already a 7-2 win against long-time player Anita Sowers, and a 7-1 win against Victoria Mason. The pressure was on the young gun to prove she was capable, and prove she did. Pulling victory from defeat’s hands, Briana downed Karen hill-hill.

Karen, not taking this lightly, went on to win against Elaine Wilson (7-1), the previously mentioned match against Gwen Townsend (7-5), Nicole King (7-3), Eugenia Gyftopoulos (7-0), and in the semifinals, Tina Malm (7-2), earning a rematch against Briana in the finals.

And what a finals it was! In a modified race to 7, Karen, coming from the B-side, needed to get to 7 games first to ensure a race to 9. If undefeated Briana reached 7 games first, the match would be over. Starting with back to back break and runs, the score was tied 1-1, with Karen breaking 3rd rack. She scratched on the break, giving ball in hand to Briana who executed a flawless runout from the 1 ball. The next rack showed some safety play, but Karen won that one. Both players were gunning for first, and the next 3 racks were alternated break and runs. At 4-3 with Karen ahead, Briana broke with the hope to recapture her lead. The layout was unlucky and she was left behind the 5 with no way of hitting the 1. After a pushout and some safety play, Karen took that rack. Keeping with that momentum to run the next rack out, she hung the nine on a sharp, midtable cut. That gift would be Briana’s final score as Karen shifted into a higher gear and ran the next 3 racks with little or no opportunity for a challenge.

In the final rack, with the score 8-4, a safety battle ended with an opening for Briana. The young champion ran through to the last 3 balls and had an unfortunate bump to the nine ball that led to her demise. Briana conceded the last two balls to the legendary Karen Corr, making Karen the winner of the JPNEWT Tour Stop #4 at Champion Billiards in Frederick, MD! Congratulations, Ms. Corr!

The JPNEWT tour would like to thank our sponsor, J. Pechauer Custom Cues, Coins of the Realm in Rockville for adding money, Britanya Rapp for sponsoring our streaming, Champion Billiards in Frederick for hosting us, and special thanks to Lights Out Billiard Apparel for sponsoring our all new challenge table! Thank you and come see us at Classic Billiards in Phoenixville, PA, for our next tour stop August 26-27th.