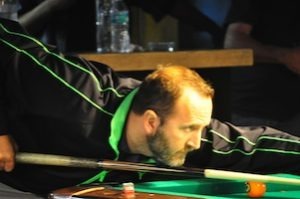 Nick Conner nabbed an Omega Billiards Tour stop in October at Speeds Billiards in Arlington, TX. The field of 75 players and $1,500 added was full of top players and by Sunday there was no front-runner as too many great players were still left competing!

Mike Nagaki would have wins over Robin Barbour, 7-4, Mike Arebalo 7-2, Alberto Nieto 7-6, Steve Game 7-4, Cory Anderson 7-5 and then Nick Conner 7-4 in the hotseat to find himself in the finals! Nick Conner had wins over Jay Diaz 8-2, Mike Rountree 8-6, Mike Stankiewics 8-3, Jordan Gartenberg 8-2 and then Greg Sandifer 8-2 before he was sent to the one-loss side by Mike Nagaki.

After losing to Nick Conner in the second round, Mike Rountree started his tear and defeated Chris Smith 7-4, Juan Parra 7-6, Friday Abismo 7-4, Anthony Shea 7-5, Phillip Palmer 7-1, Alberto Nieto 7-1, Cory Anderson hill-hill, and then Crispian Ng 7-3. He was finally defeated by Nick Conner (again) but Mike finished an impressive 3rd place and his highest yet!

This left only Mike Nagaki and Nick Conner remaining in the tourney. Nick would win the first set 8-5 to force a second set. Then the next set went to a tough hill-hill with great play, and Nick came out on top to win his first stop of the year!

Congrat’s to Daniel Gilmore and Aberto for placing 7th/8th, Greg Sandifer and Cory Anderson for placing 5th/6th, Crispian for 4th, Mike Rountree for 3rd, and Mike Nagaki for HIS highest finish of 2nd place! And to Nick Conner for nabbing first place!

A HUGE thank you goes out to our sponsors Omega Billiards Supply, Predator Cues, Poison Break Cues, BCAPL/CSI, and Lucasi and Players Cues. We would also like to give a big thanks to our additional sponsors, Hulsey Custom Cues, OB Cues, Irving Ink and Thread, Pro Billiard Service, AZBilliards.com, Billiards Digest, and BilliardsPress.com.

After nine stops this year, Greg Sandifer has grabbed first place in the Predator Player Points Rankings by only FIVE points over Nick Conner. Nick Conner was Tour Champion last year and Greg Sandifer is the Omega Billiards Tour Champion now this year!   Nick is ranked 2nd this year, Daniel Herring finished an impressive 3rd place in the rankings, Cory Anderson finished the season ranked 4th, with Crispian Ng finishing in 5th place. The top three players will all receive Predator Prizes! Places 4th through 8th will receive a FREE entry into BCAPL Nationals in 2016! 6th place was filled by Steve Raynes, 7th was Tommy Ulbik and 8th place was Philip Palmer. What a fantastic season for these guys!

Tournament Director Melinda Bailey thanked Speed’s Billiards owners and staff for their awesome hospitality all weekend!  “A big thank you also goes out to Michael Hoang, main sponsor of the Tour and owner of Omega Billiards Supply in Hurst, TX. Michael and Omega Billiards Supply are well known for the huge booths at many large tournaments across the country.”

The next stop is the SEASON FINALE Nov 14-15 at Rusty’s Billiards in Arlington, Texas.  AT LEAST $4,500 added and players who played in three events this season are eligible to play. Pool is alive and thriving in Texas!

Last Lady – split between Chris Fields and Tracie Voelkering $40 each