Organizers of the Atlantic Challenge Cup today announced Connelly Billiards has been named the official pool table for the 2016 event taking place July 8-11, 2016 in Schaumburg, Illinois (just outside Chicago). 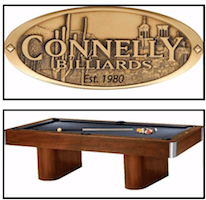 Connelly will be providing its Connelly Competition Pro table for use in the tournament room, as well as in the Team USA and Team Europe practice rooms.

“The success of the inaugural Atlantic Challenge Cup was beyond our imagination and really caught the attention of the industry, including the leaders of Connelly Billiards,” said Billiard Congress of America Chief Executive Officer Rob Johnson. “We are excited to have their support for the first Atlantic Challenge Cup on American soil.”

“Connelly Billiards is thrilled to be the official table partner of the Atlantic Challenge Cup,” said Connelly and Valley Dynamo President Kelye Stites. “Promoting our wonderful game through a unique format that aids in the development of tomorrow’s players on both sides of the Atlantic is a perfect fit for us. We’re very pleased to be an integral part of the Cup for years to come. The Competition Pro is our crowning tournament table achievement. We’ve crafted the table to be aesthetically beautiful while maintaining the superior construction, quality and consistent playability that we, as billiard manufacturers, have provided for more than 70 years.” 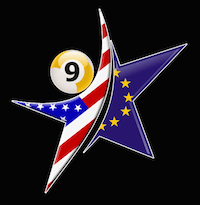 Now in its second year, the Atlantic Challenge Cup features the best youth players from Europe and America in a Mosconi Cup style event. Six players on each team, four boys and two girls, battle it out on an annual basis to see who has bragging rights across the Atlantic. The event is the result of a joint venture between the Billiard Congress of America and the European Pocket Billiard Federation.

Click here for more information about Connelly Billiards – A company that was built by players for players.

Press release issued by the BCA and the EPBF.
Become A Partner Of The Atlantic Challenge Cup

For more information on the numerous partnership opportunities with the 2016 Atlantic Challenge Cup, please contact Rob Johnson at 303-243-5070.