(New York City)–One of the unique new features of the World Pool Series is the implementation of the shootout to decide matches that end up tied with one rack left. The idea is to create excitement for fans, as each player is left with just one type of shot to make; 5 tries at a difficult full table cut on the 8-ball. It’s the ultimate pressure shot as players are forced to show full bottle and guts to try and advance. 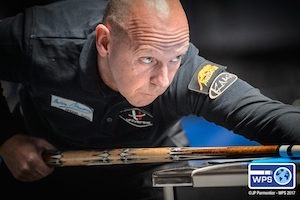 Ralf Souquet Advances Via One of 12 Match-Deciding Shootouts As The Aramith Masters Goes Down To The Final 16
If day 2 of the Aramith Masters was any indication, fans can expect plenty of full throttle drama to decide matches going forward as we enter the business end of this, the second leg of pool’s newest tour. 72 matches were played today, and a whopping 12 of them were decided by shootouts.

Three of those nerve rattling shootouts featured England’s Chris Melling, who seemed attracted to the cliff hanging drama like a bee to honey. Melling’s stroke is normally steadied and honed by years of playing  snooker, but  several times today he cracked under the weight of the moment. He won his first shootout, then lost his second, which sent him over to the losers side of the double elimination bracket. The third time he found himself staring down the Philippines Dennis Orcollo, with five cut shots on the 8-ball to decide who would move on to the final 16, and who would exit the tournament. Melling beat the Filipino four shots deep into sudden death to stay alive.

Chris Melling, left, shakes hands with Dennis Orcollo after winning a thrilling shootout to advance to the final 16. It was Melling’s third shootout of the day

The day of drama started at 10am at Steinway Café-Billiards in the Queens section of New York City, with 90 players still battling it out. By the end of play near midnight, 16 players remained. All matches from here on in will now be single elimination, best of 3 sets, with each set being a race to 6.  Final sets that are tied at 6-6 will now be decided by the dreaded shootout.

Not everyone bothered to leave their fate to the nerve jangling shootout.  20 year old American Billy Thorpe put in two solid performances today to stay undefeated and advance. The Dayton, Ohio native has lately given every indication that he intends to live up to the lofty expectations American pool fans are placing on his shoulders. He  first beat England’s Mark Gray, 9-4, then came from 6-3 behind on the TV table to beat the Philippines Jeffrey De Luna, 9-7, to qualify for the final 16 round. 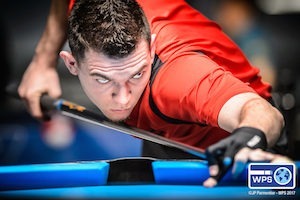 “I like playing from behind because it makes me focus even more,” Thorpe said afterward.  “I just grind it out. That’s what I do. I like having that pressure. I’m here to show what I can do.”

Two-time World 9-ball Champion Thorsten Hohmann has looked the goods the last two days. The German won twice today including a 9-6 win over England’s Darren Appleton. Appleton was sent over to the losers bracket but eventually qualified for the final 16   with a scrappy 9-6 win over the Philippines Johann Chua.

The Philippines Roberto Gomez seems to want to live up to his “Superman” moniker as he put in two terrific performances Thursday. Gomez first beat Spain’s David Alcaide, 9-4, then took down red hot Jayson Shaw 9-6. Shaw, however, bounced back from the losers side with a fine 9-4 thumping of fellow Brit Karl Boyes to advance.

Greece’s Alexander Kazakis has been the most dominant player of the tournament so far, only conceding 7 racks over three matches. The young Greek qualified for the final 16 by beating England’s Raj Hundal, 9-4. Hundal then went to the cliff with fellow Englishman Mark Gray, and barely squeaked by, winning a thrilling shootout to advance to the final 16.

Estonia’s Dennis Grabe continued his run of putting in impressive performances in pool’s big events. The tall and quiet Grabe looked very strong with two victories today to move into the final 16, first beating Karl Boyes, 9-6, then defeating Carlo Biado, 9-7. Biado bounced back but barely, qualifying to the final 16 by beating American Shaun Wilkie in yes, you guessed it, a shootout.

German legend Ralf Souquet had a real slog today as he won three matches off the losers’ side to advance. Souquet, who recently won a Euro Tour event and seems to have rediscovered his infamous golden stroke, had to wait to the bitter end in his third match with American Josh Roberts. The two went to the hill, and, yes, the shootout, which Souquet handily won, to book a spot in the final 16.

The World Pool Series Aramith Masters continues Friday at Steinway Café-Billiards with the Final 16 single elimination, which begins at 12 noon, EST.  By the end of the day, the field will be down to the final four. The Semis and Finals will be played on Saturday.

For more information please visit the official website of the World Pool Series at http://www.worldpoolseries.com/