THE SIBERIAN EXPRESS STEAMROLLS TO THE CROWN Chinakov’s success on Tuesday represents the biggest win of the 23 year old’s career. Since he began his international career at the tender age of just 13 years old, the young Russian, a veritable pool prodigy since the very beginning, has been a fixture on the pro scene around the world. At 15 years old he won the WPA Jr. World 9-ball Championship. He also captured two straight Kremlin Cup titles. And he’s had many solid finishes in tournaments globally.

But this week’s win in the Big Apple surely represents a new level of accomplishment for Chinakov, and signals a new phase in the towering and talented Russian’s career. The Molinari Players Championship, the first of four 8-ball tournaments that make up Darren Appleton’s brand new tour called the World Pool Series, attracted a seriously world class field of 120 players from over 35 countries. They played a version of 8-ball that was designed to be as tough a test as players could possibly face. And when the four day slugfest concluded, it was Chinakov who clearly stood well above this amazing field. Steinway Billiards in the Queens area of New York was packed for the last day’s semis and final.

Tuesday will be a day that Chinakov, and those that watched it, won’t soon forget as he manhandled two of the Philippines best on route to the winners circle. In his semi-final match against hot shot Pinoy Johann Chua, also 23 years old, the Russian wasted little time in stamping his class on the proceedings. Chinakov lived up to his nickname, “the Siberian Express” as won the lag and proceeded to run the first six racks on the Filipino, and quickly pushed his lead up to 9-1 with his smashing break shot and crafty shot making. Chua did manage a brief fight back, but the Russian rebuffed him at every turn and walked into the final with a 15-8 victory.

Corteza came into the final playing some of his best pool in the last two years, but he nearly didn’t even make it out of his semi-final match with Appleton. The Englishman was wearing two hats as both promoter and player this week, and was playing care free and as strong as ever. Appleton looked to be on his way to a finals date as he powered out to a 9-4 lead. Corteza, though, would have none of it as he stormed back with six straight racks to lead 10-9.

From there the two greats went toe to toe, and headed straight for the cliff. Down 14-13 and with the pressure bearing down, Corteza took advantage of a dry break by Appleton and cleared a very difficult layout to tie, and send the match into a dramatic shootout. In the shootout Corteza shot first and made his first attempt at the full table spot shot on the 8-ball. From there he never trailed,  eventually winning  4-2 to advance to the final against Chinakov.

At over three and a half hours long, Corteza’s match against Appleton had clearly drained the Filipino as he only had one hour to get ready for Chinakov, while the Russian had rested for 6 hours. In the end, however, it probably made little difference as Chinakov was playing too good to be stopped.

The pair traded several racks to open the race to 16, winner breaks final. But when Corteza missed a makeable 8-ball while down just 4-3, Chinakov pounced and never looked back. His towering break shot led to balls dropping and patterns opening up, and soon the Russian was up 7-3.  Chinakov kept feeding off the momentum while Corteza had few answers and the score quickly went to 12-4.  The Filipino tried to mount a comeback with two racks of his own, but the day belonged to Chinakov, who was just too strong, too good and clearly destined for victory. Chinakov took the next four racks, and when he dropped the final 8-ball he had claimed an emphatic, awe inspiring16-6 win.

Afterward a clearly delighted and overwhelmed Chinakov basked in the glow of his sensational victory. Already a hard worker, he said he had doubled his efforts over the last two years, even hiring famed Dutch coach Johan Rysink to help him build up not just his technical skills, but also his mental toughness to deal with his sometimes uncontrollable nerves. The work had clearly paid off on all fronts. The future for 2017 and beyond was suddenly looking very bright indeed. “This is probably the biggest event I have ever won,” Chinakov said. “It’s a great feeling. I still can’t believe I just did this. I didn’t really think about winning today, I just tried to play good and show what l can do. I didn’t play 100% but I still won. Even at this level anyone can miss balls, I just missed less than the other guys. That’s why I’m quite happy about it.

“This is very satisfying because I’ve worked hard for the last two years. This is definitely going to give me a very big boost going forward and hopefully I can keep winning. I also know that this win will help me to perhaps win even more this year. When you can compete and then win against the best players in the world, world champions and other greats, I think 40 of them, and you can even win the tournament, it really tells me that I am headed in the right direction. `

“We both made some mistakes and that’s to be expected in a race to 16, these are really long sets and there’s a lot of ups and downs. When it was up 4-3 I made a few good runs, some break and runs and my lead kept increasing.  I think that put him under pressure and he then made a few mistakes, and I just cleaned the table.”

As befitting the always classy Filipinos, Corteza took the loss on the chin and gave credit where it was clearly due. The Filipino took solace in the fact that he started 2017 with one of his best finishes in the last two years.

“I missed a couple of shots, the 8-ball in one rack, then the 10-ball in another,” Corteza said. “I just had bad luck today. I couldn’t get good layouts on the break shot, or I have no shot on the break. It was very difficult to figure out what to do. He broke fantastic and was always getting shots and he had the momentum. I was also feeling a bit tired.

“But he deserved to win. He broke better than me, he really had power on the break. I’m still happy because I played good this week. This is one of my best finishes in a while so I just have to go to the next event and I feel really good about my game.”

With the biggest win in his ten year career to date, Chinakov deservedly felt even better about his game and prospects for the coming months.

“After you win big tournaments, you just come to believe in yourself more and more,”Chinakov said. “And that means in the next big match, I might be less nervous and have better concentration, and that means you have more chances to get the title or finish quite close to the title.

“This is the best start of the year that I could ever imagine.” 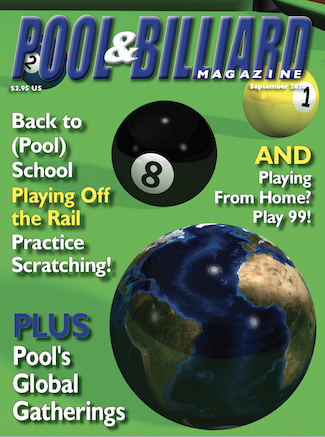