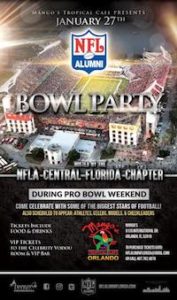 Orlando, Florida- Dragon Promotions Founder & Executive Producer Charlie Williams has now been acquired by the wealthiest sport on Earth, professional football. The former international pool champion turned promoter/producer is now in charge of all the marketing, sales, and events for the NFL Alumni in Central Florida. The NFLA is the charitable arm of the NFL that services communities and former NFL players in need. The Alumni is a 501c3 charity with over 11,000 active current and former player members. 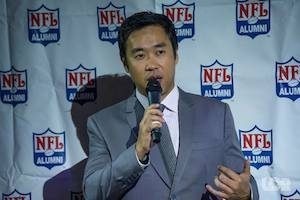 “Seeing Dragon Promotions in action at our events and Orlando Synergy doing the marketing has been eye opening. Charlie is one of the hardest working and brilliant people I’ve ever met. He has created business strategies coming to fruition fast with more events and media attention than we’ve ever had before. The abilities, professionalism, and passion of his companies as a whole is unsurpassed”, said Seneca McMillan, former Greenbay Packer and the President of the NFLA CF.

“Working with the NFL Alumni and the NFL pros has been incredible so far. Never in my wildest dreams did I picture working within pro football. Our mutual friend and client the Orlando Commissioner Regina Hill put us together and we just hit it off right away. More pleasingly, is the fact that these players I engage with are so down to earth and have such good hearts, that it’s truly a pleasure working together.  It’s been an incredible roller coaster ride so far and can’t wait for more to come”, said the former 4x Mosconi Cup champion Williams. 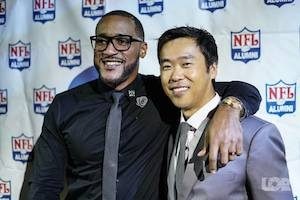 “This could very likely be the biggest thing that has happened for Dragon Promotions. Starting from a niche sport and then moving onto mainstream sports like soccer and tennis were great moves. But now being involved in the NFL, this is the epitomy of mainstream society. So we have definitely seen the spectrum”, said Cindy Lee, CEO of Dragon Promotions. 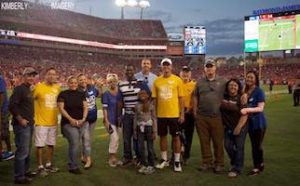 Fans can purchase tickets for the upcoming January 27th Bowl Party by clicking here
Anyone can join the NFL Alumni as an associate member goto NFLAlumniFlorida.com

Since 2001, Dragon Promotions and Orlando Synergy Marketing have been event organizing and brand marketing worldwide.  As one of the leading producers and sports programming in the world today covering billiards, tennis, football, golf, MMA, charity events and more.  In a span of 16 years, Dragon Promotions has produced over 400 international events and over a 1000 hours of original television programming airing on TV networks globally from the USA, China, Philippines, South Korea, Canada, the Middle East, all of Asia, and Europe. Events include the Kings Cup, the NFL Alumni Pro Bowl Party, The Florida Tennis Tour,  The World Tournament of 14.1, KIA Motors Football Korea vs Philippines, The Women’s International Pool Championship , Dragon MMA Combat Night, The Queens Cup, The African American Tennis Tournament, The Orlando United Tennis Open, The International 10-Ball Championship, King & Queen of Carom, The Typhoon Haiyan Tennis Tournament, Pro Pool Schools,  Women’s Trickshot Challenge, World Junior 10-Ball Championships, The World Mixed Doubles,  the Vietnamese Tennis Open  and many more. Visit www.dragonpromotions.com
For interest in marketing and branding your company, business, or events please contactOrlando Synergy at 1-407-782-4978 or emailsupport@dragonpromotions.com