Predator Group and Break Speed are proud to announce a partnership in developing the next generation Break Speed application for iPhones, iPads, and Android devices. 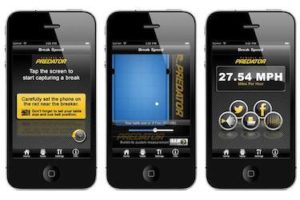 Over the past year, as the Predator R&D team finalized and tested the new BK3 break cue, a unique relationship and partnership formed with Break Speed developers Paul Nettle and Craig York. The relationship began with Predator testing the application alongside it’s own speed measurement equipment and the Iron Willie robot, following a number of testing sessions, the Predator R&D team found the application so accurate that a partnership in pool science began.