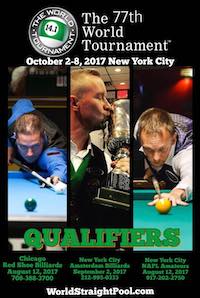 The greatest 14.1 players in history come back each year to vie for the most prestigious & traditional title in pool

New York City- The qualifiers for the BottleDeck.net 77th World 14.1 will take place in Chicago and twice in New York City. The winners will get a chance to compete in the longest running and oldest tradition in billiards, the World Tournament of 14.1. 2017 marks the 12th consecutive year the World Tournament of 14.1 will be staged which is the longest consecutive run of the championship ever in its 105 year history with Dragon Promotions continuing at the helm. This year’s confirmed dates for the 77th WorldTournament of 14.1 will take place on October 2nd – 8th, 2017 and presented by Show Pro . For the fifth straight year, Steinway Billiards in New York City will host the prestigious championship. As usual, a star studded 48 player round-robin field is expected for this year’s lineup to win the world’s greatest straight pool championship.

This year’s main NYC event Oct will be stacked with talent as it comes in between the World 8Ball Series Finale AND the US Open 9Ball. Pros better register your entry ASAP or you will be shut out!
Qualifier Dates:
August 12: Chicago at Red Shoe Billiards
August 12: New York City *NAPL Members Only at Amsterdam Billiards
September 2: New York City at Amsterdam Billiards
$105 entry fees . Race to 100 double elimination. Top 2 winners qualify with free entry fee to the Main Event.

In addition, the 7th Annual Straight Pool Hall of Fame Banquet will take place in the middle of the event on October 4th at 7:00pm. Every year the popular dinner sells out with all the pool stars and legends attending.

Be a proud sponsor of the most prestigious and classiest event in the United States, the World Tournament of 14.1 which has been ongoing since 1912. For only $250, become part of the elite World 141 Club and garner all the benefits that well exceed the money you will spend. Click here for full details. We invite you to join this year’s 77th anniversary event in New York City as a supporter or attendee. For those interested in a higher level of support as one of our advertisers or elite World 14.1 Patrons, please reply here or call 407-782-4978 .

Throughout a decade, Dragon Promotions has been able to revitalize straight pool back into the sport and to new audiences. In 2006, straight pool was near it’s complete death in the US. Since then we have poured our resources in media, finance, and know-how to grow the popularity of 14.1. Today, the consensus among the professionals on tour is that the World 14.1 is one of, if not the most, important titles to win in America. Something not expected decades ago.

Since 2001, Dragon Promotions and
Orlando Synergy Marketing have been event organizing and brand marketing worldwide. As one of the leading producers and sports programming in the world today covering billiards, tennis, football, golf, MMA, charity events and more. In a span of 16 years, Dragon Promotions has produced over 400 international events and over a 1000 hours of original television programming airing on TV networks globally from the USA, China, Philippines, South Korea, Canada, the Middle East, all of Asia, and Europe. Events include the Kings Cup, the NFL Alumni Pro Bowl Party, The Florida Tennis Tour, The World Tournament of 14.1, KIA Motors Football Korea vs Philippines, The Women’s International Pool Championship , Dragon MMA Combat Night, The Queens Cup, The African American Tennis Tournament, The Orlando United Tennis Open, The International 10-Ball Championship, King & Queen of Carom, The Typhoon Haiyan Tennis Tournament, Pro Pool Schools, Women’s Trickshot Challenge, World Junior 10-Ball Championships, The World Mixed Doubles, the Vietnamese Tennis Open and many more. Visit www.dragonpromotions.com
For interest in marketing and branding your company, business, or events please contactOrlando Synergy at 1-407-782-4978 or email support@dragonpromotions.com