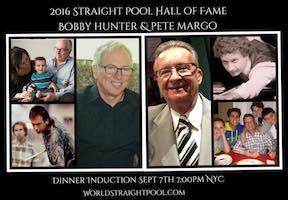 “This is probably the greatest honor I’ve ever received in my life”, said Margo.

“I was touched and honored just to be nominated for the Straight Pool Hall of Fame. For those of us who love this game, no higher goal could be realized than to be a member”, said Hunter.

While both Margo and Hunter will be inducted into the Greatest Player category, Carl “Cueball Kelly” Zingale will be inducted into the Unsung Hero category as his votes surpassed Tom Jennings and Frank McGown. Cueball Kelly was a renowned referee and vocal supporter of straight pool during 5 different decades. He was nominated by several legends including Ray Martin and Pete Margo.

“During that era of pool, a referee had an enormous impact on the match. They called out the balls and kept track of points for the players and audience. A good referee’s cadence could help even a player stay in rhythm. Out of all of them Cueball Kelly was the best. If you had a big time pool tournament, you always hired Cueball. He refereed the biggest matches of several eras”, explained Margo of Kelly’s importance to the sport.

Banquet ceremony takes place September 7th at 7pm during paused match play of the World Tournament of 14.1 being staged at Steinway Billiards in New York City.

Speakers at the ceremony will include many billiard luminaries including veteran professionals Allen Hopkins, John Schmidt and Charlie Williams (also the event MC).  There will also be special video tributes presented by Jerry Tarantola.

All World 141 Club members get in free as sponsors.

Join the World 141 Club and support to keep the tradition alive. — at World Tournament of 14.1.