Jeanette (Black Widow) Lee was inducted into the Asian Hall of Fame at the  Fairmont Olympic Hotel in Seattle, Washington on Saturday, June 6. The Asian Hall of Fame is a national recognition event for Asian Pacific Americans. The night was a celebration of culture, heritage, and special guest honorees who included: 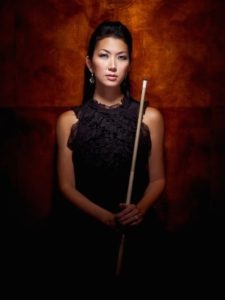 Jeanette Lee – a Korean American who grew up in Brooklyn, NY – has long been one of the world’s top-ranking billiards players. Known as “The Black Widow” for her ability to overwhelm and devour her opponents, Lee’s road to the top of her sport was not an easy one.  At age 13 she was diagnosed with scoliosis and had a steel rod implanted in her spine.  For the next 20 years, she would undergo nine more surgeries to strengthen her back.

Despite undertaking surgeries well into 2005, Lee was already earning national titles in the mid-1990s (including the WPBA National title in 1994) and became a mainstay in the international setwalls billiards scene by the early 2000s.  The 2001 World Games Gold Medalist, 2003 Tournament of Champions Winner, 2004 WPBA Florida Classic Hard Rock Casino Winner, 2004 International Trick Shot Champion, 2007 Skins Billiard Champion, 2008 and 2009 Empress Cup Champion, Lee was previously ranked #1 in the world in her sport.  Her achievements have garnered inductions to the BCA Hall of Fame and WPBA Hall of Fame and numerous recognitions – including Player of the Year – by  Pool & Billiards Magazine and Billiards Digest. 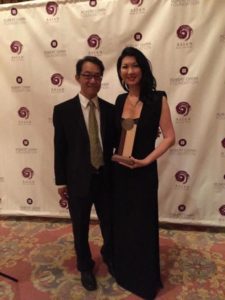 Jeanette Lee remarked on her FB page that it was “So awesome to be inducted into the Asian Hall of Fame with my lovely mom and my cousin Esther here in Seattle! Thank you to Poison Billiards and American Poolplayers Association (APA)  for all your support! Presented by Dan Louie… ”